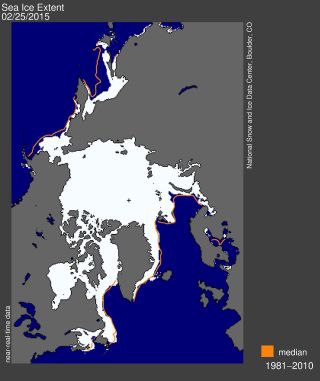 The authors of the NSIDC report also found below-average ice conditions everywhere except in two regions of the North Atlantic Ocean: the Labrador Sea and the Davis Strait. [Images of Melt: Earth's Vanishing Ice]

Researchers have seen fluctuations in the date of the sea ice's peak, with it occurring as early as Feb. 24 in 1996 and as late as April 2 in 2010. Still, this year's maximum extent occurred 15 days earlier than the March 12 average calculated from 1981 to 2010.

The Arctic ice cap grows and shrinks with the seasons, and changes in the region's ice cover are largely dictated by variations in sunlight, temperature and weather conditions.

Ice growth this winter lagged behind last year's progress, partly due to unusual patterns in the jet stream in February that created warm pockets over the Bering Sea and the Sea of Okhotsk, in the western Pacific Ocean, according to the NSIDC.

Yet, officials say a late-season boost in ice growth may still be possible.

"Over the next two to three weeks, periods of increase are still possible," NSIDC scientists wrote in the report. "However, it now appears unlikely that there could be sufficient growth to surpass the extent reached on February 25."

The NSIDC is expected to release a full analysis of this winter's sea-ice conditions in early April.