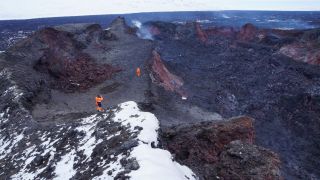 Four geologists in Iceland had one of the hottest jobs on Earth this week.

To capture accurate measurements of toxic volcanic gases, the scientists climbed directly into Iceland's Baugur crater on Wednesday (March 4), where lava bubbled and frothed only three weeks ago. Baugur crater was the tallest and largest crater in the long line of sputtering cones built by the Barbarbunga eruption's spectacular fire fountains. A 165-foot-wide (50 meter) river of lava once flowed to the northeast from a boiling lava lake inside the crater.

The surface is still a red-hot 1,110 degrees Fahrenheit (600 degrees Celsius) in spots, and the scientists had to wear gas masks and carry oxygen, according to Evgenia Ilyinskaya, a volcanologist with the British Geological Survey. But the views are absolutely stunning. [Amazing Images from Scientists' Dive into Toxic Volcano ]

Since the Bardarbunga volcanic eruption ended on Feb. 27, the crater's lava lake has collapsed, leaving a black lava crust strewn across the bottom of the crater. Rubbly red-and-black basalt looms over the freshly cooled lake surface. Small vents of blue sulfur-dioxide gas rise from the crater, along with puffs of steaming hot water vapor. There are also small amounts of chlorine, fluorine and carbon monoxide spewing from the crater, according to the Icelandic Met Office

In places where the gas vents were out of reach, the scientists stuck a Dyson vacuum into the fumes, sucking up samples for testing.

The eruption started Aug. 31, 2014, when a giant crack opened in the earth and lava exploded out onto the sands of Holuhraun, a remote river valley in central Iceland. The molten rock had traveled underground some 28 miles (45 km) from its original source — the magma chamber under Bardarbunga volcano. Just like Hawaii's Kilauea volcano has a huge plumbing system that may erupt in several different places, Bardarbunga volcano has a big underground network that feeds magma to distant eruptions. In August, before the Holuhraun eruption began, scientists tracked the rising magma as it tunneled from underneath Bardarbunga toward the surface.

Baugur (which means "circle")  is more than 260 feet (80 m) high and about 325 feet (100 m) wide. The scientists were dropped off inside the crater by a helicopter. The crater's surface temperature, along with other evidence, suggests there is still molten rock about 10 to 16 feet (3 to 5 m) below the crater floor, the most recent field report said.

In the coming months, Ilyinskaya and colleagues from the Icelandic Meteorological Office and the British Geological Survey plan to closely monitor gas emissions from the crater and the cooling Holuhraun lava field (the area covered with lava from this eruption). Without the heat boost provided by an active lava flow, the volcanic gases will hug the ground instead of rising into the sky on thermal plumes. That means gas concentrations could increase at the elevations where people live and breathe, according to the Icelandic Met Office.

Sulfur dioxide pollution has reached hazardous levels several times in Iceland since the eruption started on Aug. 31. Researchers are also tracking acid snow and rain throughout the country.