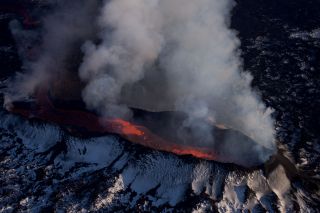 A view of the Holuhraun crater on Jan. 31, 2015.
(Image: © Ólafur Sigurjónsson/Icelandic Met Office)

Iceland's biggest volcanic eruption in more than 200 years has ended for now.

The huge Holuhraun lava field is still pocked by steaming craters, but no glowing lava was seen from the air or detected by satellites on Friday (Feb. 27). Scientists with the Icelandic Meteorological Office declared an end to the six-month-long eruption on Saturday (Feb. 28).

However, scientists will still watch for signs that magma is building pressure beneath Bardarbunga volcano, the source of Holuhraun's lava. A series of eruptions could take place in the coming months to years either underneath the volcano or in a different location, or Bardarbunga could go back to sleep.

"Things have reached a quiescent stage, but it doesn't necessarily mean that nothing more will happen," said Simon Redfern, an earth scientist at the University of Cambridge in the United Kingdom who is studying the eruption.

The Holuhraun eruption started to slow in February, with earthquakes becoming smaller and less frequent. In recent weeks, vents shut down inside its lava-filled crater, north of Vatnajökull glacier in remote central Iceland. [Gallery: Beautiful Images of Bardarbunga's Volcanic Eruption]

The crater was connected to Bardarbunga volcano by an underground magma dike. This long tunnel piped molten rock from underneath the volcano to the crater, where lava flowed to the surface.

Bardarbunga's surface has deflated like a leaky balloon since the eruption started because the dike was emptying the volcano's magma chamber. But last week, the land stopped sinking, a sign the feeder pipe had shut down. Now, if new molten rock pushes into the volcano from deeper levels, it will lift the volcano's surface back up instead of oozing east.

"Now we have a chance to see how rapidly the volcano is being recharged," said Páll Einarsson, a University of Iceland geophysics professor. "By monitoring the uplift, we might be able to answer the question: Is this the end of the activity, or do we have to prepare ourselves for the next chapter in the story?"

A subglacial eruption at Bardarbunga could produce copious amounts of ash and trigger flooding.

The closely watched volcano will likely reveal its plans within the coming month, via changes caused by magma accumulating underground. For instance, in August, scientists timed the Holuhraun eruption by tracking Bardarbunga's magma as it tunneled underground some 28 miles (45 kilometers) from the volcano to the sands of Holuhraun.

"This was the first time we visualized a subterranean magma flow," Redfern said. "It's given us new insights into the way that magma moves beneath volcanoes."

Einarsson said that predicting Bardarbunga's future based on past eruptions is fraught because each of Iceland's more than 30 volcanoes has its own personality. "We really have to get to know them on a personal basis to tell what they're up to," he said. And Bardarbunga is one of the least understood because it is hidden by a glacier and has a poorly known history.

The eruption spread lava across 33 square miles (85 square km) — bigger than Manhattan Island — since it began Aug. 31 and has spewed toxic gas across Iceland and Europe. Scientists will continue to monitor the eruption for gas emissions, the Icelandic Met Office said. Gas still rises from cooling lava, including carbon monoxide, sulfur dioxide and chlorine.