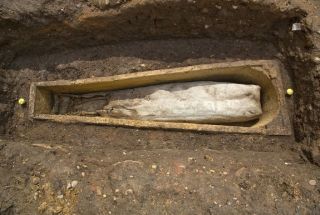 The lead coffin found was inside a stone coffin in the ruins of Grey Friars in Leicester.
(Image: © University of Leicester)

Archaeologists found a lead coffin buried in the ruins of an English medieval church, just feet from the grave of British King Richard III. When they opened the tomb, they expected to find the skeleton of a knight or a friar. But instead, they found the bones of an elderly woman.

The woman's identity remains a mystery, but a study of her bones has revealed some key details about her life, the excavators announced today (March 1). She was interred sometime in the late 13th or 14th century, before Richard was hastily buried at the monastery known as Grey Friars in Leicester, England. She must have been of a high status, because her bones show signs of a lifetime of eating well.

She's also not the only woman buried on the grounds of Grey Friars. In fact, Richard III is the only man archaeologists have examined from the site so far. The four other graves, including the lead coffin, belonged to women, archaeologists said.  [See Images: The Search for Richard III's Grave]

Richard III ruled England from 1483 until he was killed on the battlefield during the Wars of the Roses in 1485. As his rival, Henry Tudor, ascended the throne, Richard received a hasty burial at the Grey Friars monastery, which was demolished in the 16th century during the Protestant Reformation.

Until recently, Grey Friars' exact location was lost to history. In 2012, archaeologists with the University of Leicester found the ruins of the monastery as well as Richard's long-lost grave under a parking lot.

Much of the hype around the excavation has centered on Richard, and his remains have already yielded a wealth of data on the king — he died a violent death; he ate quite well while on the throne; and he suffered from scoliosis. But archaeologists have also been studying whatever else they can find in the church.

The lead coffin, which is decorated with an inlaid crucifix, was hidden inside a larger limestone sarcophagus. It was discovered during a second excavation at Grey Friars, in August 2013, underneath what would have been the church's floor near the high altar. At the time, the tomb was first billed as the only intact stone coffin ever found in Leicester. The excavators publicly speculated that it might contain one of Grey Friars' founders, such as Peter Swynsfeld or William of Nottingham, or a knight named Sir William de Moton of Peckleton.

"It was such an elaborate burial," Morris said, that it seemed obvious the person inside should be someone of high rank. From historical documents, Morris and his colleagues knew several women were connected with the church as donors and benefactors. The woman's bones indicate she clearly enjoyed a high-status lifestyle — eating a high-protein diet that included lots of meat and fish, with no periods of malnutrition — but she hasn't been linked to a specific historical person.

Two other women between ages 40 and 50 were found buried in wooden coffins (which have since disintegrated, though the nails survive) inside the friary's choir where Richard III was found. Radiocarbon dating showed that they likely died between 1270 and 1400. One of the women had a hip problem that forced her to walk with a crutch, and the other seems to have used her arms and legs regularly to lift heavy weights, suggesting a life of hard physical labor, the researchers said.

There was another set of female bones buried in a pit. Morris said workmen who demolished the church hundreds of years ago may have disturbed a grave and reburied the skeleton as such.

Most other monastic cemeteries in England have female-male burial ratios ranging from 1 female for every 3 males to 1 female for every 20 males, Morris said. The excavators don't know exactly what to make of all the female burials at Grey Friars, and they were cautious about drawing any broad conclusions based on this small sample. The archaeologists identified but didn't examine five other burial pits on the site, and they imagine these burials were just a fraction of the total graves on the church grounds.

However, it's unlikely that archaeologists will unearth more of the graves at Grey Friars any time soon, as most of the cemetery lies beneath housing today, Morris said.