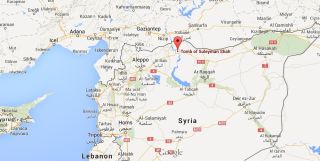 The pin shows the former location of the tomb of Suleyman Shah in northern Syria
(Image: © Google Maps)

Turkey staged its first large-scale military mission in Syria over the weekend, sending hundreds of troops and armored tanks across the border not only to rescue a group of stranded soldiers but also to save an 800-year-old skeleton.

During the raid in the Syrian village of Karakozak, on the banks of the Euphrates River, Turkish forces recovered the sarcophagus, human remains and other relics from the tomb of Suleyman Shah, the grandfather of Osman I, who founded the Ottoman Empire.

The incident put a spotlight on Syria's cultural heritage, which has often been caught in the crosshairs during conflicts in the region.  [Photos: Damage to Syrian Ruins Seen from Space]

"It surprised me that the Turkish government launched this fairly large mission involving several hundred troops to go and do this," said Michael Danti, an archaeologist at Boston University. "I think it really shines a light on the central focus of heritage in the current conflict. This is the first time Turkey has moved in and officially done something in Syria since the start of all this — and it's about heritage."

Danti has been compiling weekly reports on the status of Syria's imperiled archaeological sites as part of a U.S. State Department-funded initiative through the American Schools of Oriental Research. From sources in Syria, media reports and satellite images, Danti and his collaborators have been documenting the destruction to Syrian heritage due to looting, combat damage, illegal construction and sometimes deliberate destruction.

Suleyman Shah is believed to have drowned in the Euphrates River in the 13th century, and since then, his tomb has been relocated several times. Most recently, construction of the Tabqa Dam threatened to flood the tomb, and it was moved from Qal'at Ja'bar (sometimes called Caber Castle) to a specially built mausoleum in the village of Karakozak in 1975. Though the tomb was in Syria, about 23 miles (37 kilometers) away from the Turkish border, it had been considered a sovereign territory of Turkey.

Turkish Foreign Minister Ahmet Davutoglu had warned in March 2014 that any attack on Suleyman Shah's tomb would "bring retaliation," Reuters reported at the time.

For the past several months, Turkish soldiers guarding the tomb have been cut off, as militants with the Islamic State extremist group (also called ISIS, or ISIL) tightened their grip in the region, The New York Times reported. Turkey decided to launch its so-called Operation Shah Euphrates, apparently fearing the tomb would become a target amid clashes between ISIL and Kurdish forces.

After recovering Suleyman Shah's remains during their raid, Turkish troops destroyed the modern 1970s mausoleum themselves, according to the BBC.

"It ultimately speaks volumes that Turkey's greatest fear was that ISIL would take over the site so it could blow it to pieces in a performative, deliberate destruction and then post the video footage online," Danti told Live Science. "That was clearly what Turkey was trying to avoid in terms of damage control."

Just as ISIL has publicized its violent executions of hostages, the extremist group has been brazen about its destruction of cultural heritage. ISIL militants have deliberately destroyed Sufi shrines and historic tombs considered idolatrous in their interpretation of Islam, and they've recently destroyed library collections in the Iraqi city of Mosul.

Danti said he is still waiting for new satellite images to verify the extent of destruction at the former site of Suleyman Shah's tomb, as well as alleged looting of archaeological sites nearby along the Euphrates.

The Turkish government, meanwhile, said it was moving Suleyman Shah's remains to a new tomb in the village of Esmesi, just south of the Turkish-Syrian border. Turkish President Recep Tayyip Erdoğan said in a statement that no clashes took place during the relocation, though one Turkish soldier was killed in an accident.