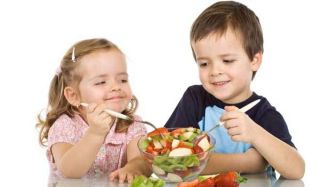 New guidelines released today by a leading U.S. pediatricians group urge a more practical, commonsense approach toward nutrition to help improve children's diets and health, both in school and at home.

The guidelines come in a policy statement from the American Academy of Pediatrics, offering the organization's latest thinking on foods and nutrition. The statement encourages a broader dietary pattern that is focused more on what children — and adults, too — should eat, rather than what they shouldn't.

In the paper, the doctors focus on promoting a healthy overall diet, and using only a little bit of sugar, fat and salt to make healthy foods more appealing to kids. It was published online today (Feb. 23) in the journal Pediatrics.

"Parents should look for every opportunity to make small, simple improvements in the nutritional value of the foods and drinks they provide children, in school and out," said Dr. Robert Murray, one of the statement's lead authors and a professor of nutrition at The Ohio State University.

To guide parents as well as the pediatricians who counsel parents about a healthy diet, the paper spells out a five-step approach to eating. According to Murray, these recommendations are:

2.Provide a wide variety of different foods from each food group throughout the week.

3.Offer foods in their most-natural, least-processed state as the family budget will allow.

4.Use small amounts of sugar, fat and salt to increase the amount of healthy nutrient-rich foods and drinks that kids will eat. Good examples include flavored milks or sweetened whole-grain breakfast cereals.

The pediatric organization last issued a school nutrition policy paper in 2004, when it took a stance on exclusive contracts between soft drink suppliers and schools. [10 Ways to Promote Kids’ Healthy Eating Habits]

The 2015 statement highlights the improvements made in the decade since then, which have led to changes in the types of drinks sold in schools and to additional limits on students' access to sugary drinks.

Progress has also been made in improving the meals served in schools, as well as in the nutritional value of products sold in vending machines, Murray told Live Science. But the food that students bring to school is still an issue. For example, students may bring candy or desserts to school in their lunches, or for bake sales or class parties.

"In nearly all American schools, there remains ready access to high-calorie, low-nutrient foods and beverages from products brought into school by students, parents and staff," Murray said.

This problem calls for better education of parents and staff, and greater involvement of pediatricians in schools, acting directly as child nutrition advocates, the paper recommended.

Keith Ayoob, a registered dietitian and pediatric nutritionist at Albert Einstein College of Medicine in New York, applauded the policy statement for not banning any foods. He said it gives people the information they need to make better choices.

A total-diet approach is better than calling out certain foods, such as sugar, or suggesting that people eat less of certain nutrients, Ayoob said.

When counseling parents about child nutrition, Ayoob said he offers them similar advice about focusing on giving kids the five food groups. If kids get their fill of healthy food, then they will naturally get the nutrients they need, he said.

Ayoob also said he liked that the paper implied schools can't improve nutrition on their own, and that parents need to become more mindful of health when packing lunches, planning food celebrations at school and serving family meals at home.

"Improving child nutrition has to be a community project, and parents are part of this community," Ayoob said.