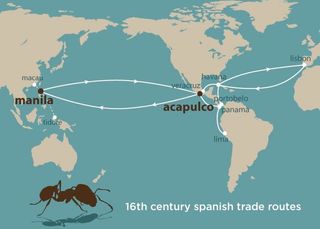 Spanish ships spread tropical fire ants around the globe in the 16th century, according to new research about one of the first worldwide invasive species.

Tropical fire ants (Solenopsis geminata) originally hail from the Americas, but are now found almost anywhere with a tropical climate, including Australia, Africa, India and Southeast Asia. The tiny ants defend their nests aggressively, and their stings leave painful white pustules on the skin, according to the University of Florida Institute of Food and Agricultural Sciences.

The ants first spread when 16th-century Spanish galleons picked them up in the New World (the Americas), researchers reported Jan. 16 in the journal Molecular Ecology. [See Amazing Images of Ants from Around the World]

"A lot of these ships, particularly if they were going somewhere to pick up commerce, would fill their ballast with soil and then they would dump the soil out in a new port and replace it with cargo," study researcher Andrew Suarez, an entomologist at the University of Illinois, said in a statement. "They were unknowingly moving huge numbers of organisms in the ballast soil."

These unwitting stowaways found comfy accommodations along the Spanish trade routes, researchers found. They traced the insects' history by analyzing the genomes of modern tropical fire ants and found that the ants outside the Americas were most genetically similar to ants from southwestern Mexico, suggesting Mexico was the main source of the invasion.

The genetic findings mesh with historical records, Suarez said. In the 16th century, the Spanish established a trade route between Acapulco, Mexico, and Manila, Philippines. Traders brought New World silver (and, quite by accident, ants) to Manila, which was, in turn, a hub for trade with China.

The ant genomes show diversity patterns that reveal their travels. In New World populations, genetic diversity is at its highest. As the researchers stepped farther away into the regions where the ants spread, genetic diversity decreases in a stair-step manner, because each new population was established from only a portion of the previous population. The timing of the genetic changes overlaps with the Spanish trade conquest, Suarez said.

Unknowingly, the Spanish were setting up quite a headache for future generations.

"Invasive ants are a huge problem," study researcher Sara Helms Cahan, a biologist at the University of Vermont, said in the statement. "Once they arrive, they establish really high densities in new habitats, with negative consequences for agriculture, native species and human quality of life. Controlling them costs millions of dollars annually."

Solenopsis geminata isn't the only ant to cause these problems. Its close relative, Solenopsis invicta, is a major agricultural pest best known as the red imported fire ant, or simply, RIFA. This South American native has invaded the United States and Australia, and has been reported in tropical areas in the Caribbean and Southeast Asia. New Zealand has managed to eradicate three invasions by red imported fire ants since 2001, according to the country's Ministry for Primary Industries.

A genetic study published in 2011 found that the source for these RIFA invasions is the southern United States, where the ants established a foothold about 80 years ago. The study found that Solenopsis invicta has made multiple incursions into new areas, all originating from the South.