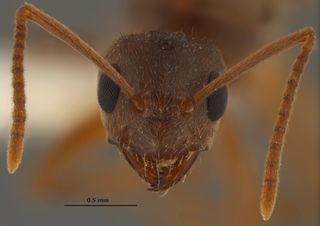 Invasive fire ants have been a thorn in the sides of Southerners for years. But another invasive species, the so-called "crazy" ant — that many describe as being worse — has arrived and is displacing fire ants in several places.

"When you talk to folks who live in the invaded areas, they tell you they want their fire ants back," said Edward LeBrun, a researcher at the University of Texas at Austin, in a statement from the school. "Fire ants are in many ways very polite. They live in your yard. They form mounds and stay there, and they only interact with you if you step on their mound."

Crazy ants, on the other hand, "go everywhere," invading homes and nesting in walls and crawlspaces, even damaging electrical equipment by swarming inside appliances. [Image Gallery: Ants of the World]

A study published in the April issue of the journal Biological Invasions found that in areas infested with crazy ants, few to no fire ants were present. Exactly how they are able to outcompete fire ants is so far unknown. In areas with crazy ants, the researchers also found greatly diminished numbers of native ant species, according to the study.

Fire ants are known for their painful stings and have spread through the Southeast since arriving from South America in the 1930s. Crazy ants were first discovered in Houston in 2002, and they have already spread to coastal areas from Texas to Florida, according to the researchers. Although the "crazies" don't have as painful a sting as fire ants, they multiply in even greater numbers. They are also difficult to control since they don't eat the same poison baits as fire ants do, the statement noted.

Last year, the crazy ant species was identified as Nylanderia fulva, which hails from northern Argentina and southern Brazil, according to a 2012 study in PLOS ONE. It's also known as the tawny crazy ant and was previously named the Rasberry crazy ant after the exterminator Tom Rasberry, who first discovered it. The "crazy" moniker comes from the ant's quick, seemingly random movements.

Luckily, the crazy ant doesn't spread as quickly as the fire ant, advancing only 650 feet (200 meters) per year on its own, the release noted. Therefore, it's vital that people don't accidentally transport the ant, the prime method by which it has spread, according to the release.