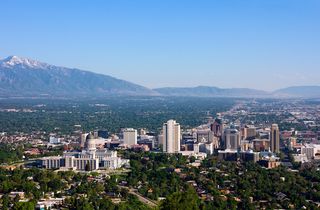 The geography of the region around Salt Lake City makes the city prone to a weather event called an inversion, which can trap air pollution close to the ground.
(Image: © Andrew Zarivny/Shutterstock.com)

Suicide may be linked to air pollution, according to new research that finds spikes in completed suicides in the days following peak pollution levels.

The research took place in Utah, part of the United States' western "suicide belt." Suicide is the 10th-leading cause of death in the United States; in Utah, it is the eighth. Though the notion that suicide and air quality could be linked may not seem intuitive, similar studies in South Korea, Taiwan and Canada have also linked the two.

Altogether, the findings suggest that suicide "is a preventable outcome, and air pollution could be a modifiable risk factor," said Amanda Bakian, an epidemiologist at the University of Utah and the leader of the new study. [5 Myths About Suicide, Debunked]

Suicide is complicated. Unsurprisingly, mental illness plays a huge role — at least 90 percent of people who die by suicide have a diagnosable mental disorder, according to the American Foundation for Suicide Prevention (AFSP). But a mental disorder alone does not necessarily make a person suicidal, nor do all people who envision committing suicide actually do so. Research suggests that short-term factors in a person's life seem to be important, as suicide is often brought on by an immediate personal or mental health crisis in a vulnerable person, according to the AFSP.

Some of these short-term factors may be external. It has long been recognized that deaths by suicide peak in the springtime months, which could be a result of social factors. However, a small but growing body of evidence suggests that physical inflammation might also be to blame. Inflammation occurs when the immune system goes into overdrive, triggering the release of a variety of compounds that act on all of the body's systems. The inflammatory compound quinolinic acid has been directly linked to suicidal thoughts, and research has further connected suicide rates with the level of inflammation-promoting particles in the air. For example, a 2013 study published in the journal BMJ Open found that suicides in Denmark went up with tree pollen levels.

Air pollution can cause inflammation as well. A 2010 study in the American Journal of Psychiatry linked suicide with increases in particulate matter in the air in Korea; 2011 research in the Journal of Affective Disorders made the same link in Taiwan. Another 2010 study, this one in Vancouver, found that wintertime emergency room visits for suicide attempts increased in the days following high air pollution levels.

In Salt Lake County, where Bakian and her colleagues are based, winters are marked by air patterns known as inversions, which often trap air pollution close to the ground. They wondered if pollution might be linked with suicides in Utah.

Working with the Utah Department of Health's Office of the Medical Examiner, Bakian and her team gathered data on all suicides in Salt Lake County between 2000 and 2010, a total of 1,546. They chose to focus only on completed suicides, not suicide attempts, because the demographics and characteristics of people who complete suicide and people who attempt suicide are different. (Men are more likely than women to complete suicide, for example, and people who die by suicide use more lethal means, such as guns, than people who survive an attempt.)

"The finer the particulates, the better they are at permeating thoracic airways," Bakian told Live Science. The study is the first to examine the link between nitrogen dioxide and completed suicides.

Surprisingly, the link between the levels of these pollutants and suicide was strongest not in the winter, but in the spring and fall.

"What it makes us think is that air pollution interacts with other spring and fall risk factors for suicide," Bakian said. [Suicide: Red Flags & How to Help]

The link was also strongest in men and among the 25- to 64-year-old age group, as well as among those who died by violent means such as firearms, the researchers reported Feb.10 in the American Journal of Epidemiology.

Bakian and her colleagues are interested in researching what might make some subgroups more vulnerable to the effects of air pollution than others. But everyone agrees that more work is needed.

"It is worth highlighting that this is only one study in an area where there is only a small body of research," said André Gagnon, a spokesman for Health Canada, the public health department of the Canadian government, where the Vancouver study was done. "These findings should, therefore, be interpreted cautiously."

Most importantly, Gagnon noted, the research can't establish that the air pollution caused the increase in suicides; it shows only a correlation between the two. In an editorial accompanying the new study in the American Journal of Epidemiology, University of Queensland researchers Yuming Guo and Adrian Barnett noted that the findings bolster the small body of research linking suicide and pollution, but that questions remain.

For example, the researchers controlled for the level of sunlight during the study period, which might affect suicide risk, but they did not control for precipitation directly. Rain or snow alone could influence suicidal behavior, and might also wash pollution from the skies, Guo and Barnett said.