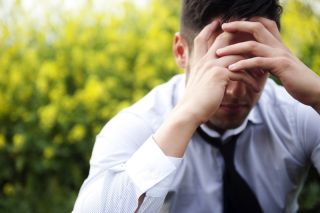 Springtime does not necessarily bring relief to people with depression. In fact, suicide rates around the world peak in spring.
(Image: © Luna Vandoorne , Shutterstock)

The fact that suicide rates tend to peak in springtime has long puzzled scientists. But now, a new study in Austria shows that in any season, a couple of sunny days may mean higher suicide rates.

The curious link between seasons and suicide rates dates back more than a century. Studies have consistently found a higher suicide rate during spring and a lower rate during winter. It is possible the weather and sunshine are driving the trend, but there are also other seasonal factors that could affect suicidal behaviors — for example, holidays, social bonds, variations in unemployment rate and access to doctors, scientists have hypothesized.

In the new study, researchers looked directly at the number of hours of sunshine for any given day between 1970 and 2010, and nearly 70,000 suicides that occurred in Austria during that time. Austria has a humid continental climate with four seasons, including hot summers and cold winters. Other countries with similar climates include Japan and eastern North America. For the study, researchers used data from 86 meteorological stations in Austria to calculate the number of hours of sunshine per day.

The results were twofold. The researchers found a link between the number of suicides and hours of daily sunshine for the day of the suicide as well as during days prior. "Sunshine on the day of suicide and up to 10 days prior to suicide seems to facilitate suicide," the researchers wrote in their study, published yesterday (Sept. 10) in the journal JAMA Psychiatry.

Conversely, sunshine during 14 to 60 days prior seemed to have a "protective effect," reducing the rate of suicide, the researchers found. [Read More: Red Flags for Suicide & How to Help]

The results also showed that the link between sunshine and suicide rate existed for both "violent" suicide methods — such as hanging, drowning and shooting — and nonviolent methods, such as poisoning.

There are some possible explanations for why sunshine may influence suicide rates. Previous studies have shown that light interacts with a neurotransmitter called serotonin, which affects mood, in both animals and people. This means that exposure to sunlight could change serotonin levels and influence behaviors and emotions, such as mood, impulsiveness and aggression, the researchers said.

Although this study is not enough to prove sunlight is triggering the increase in suicide rates during a certain time, it adds to the evidence from previous studies suggesting that light may play an important role, the researchers said.

Women are more likely than men to attempt suicide, but men are more likely to die from suicide. In the new study, the link between daily sunshine hours and higher suicide rates was seen largely among women. This finding is in line with the results of a previous study, which found that, compared to men, a shorter exposure to sunshine may be enough to trigger suicide for women, the researchers said.

If the link between sunshine and suicide risk holds true in future studies, the next step would be to identify which patients with severe depression are most likely to be affected by sunlight, the researchers said.