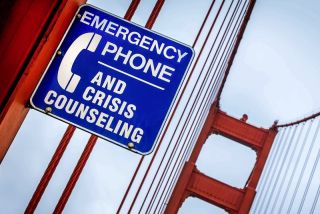 A crisis hotline sign on the Golden Gate Bridge in San Francisco. Research shows that getting people through a suicidal crisis can stop them from killing themselves.
(Image: © Dan Henson , Shutterstock)

Today, suicide will claim the lives of approximately 105 Americans.

No one knows exactly what drives these impulses for self-destruction, and in many ways, suicide remains a difficult problem to solve. But despite the impression that suicide is inevitable, it's anything but. In fact, the knowledge needed to prevent many suicides already exists, researchers say. It's just a matter of reaching those who need it most.

"If we really cared about depression as a society, we could make a huge difference," said Adam Kaplin, a psychiatrist and suicide expert at Johns Hopkins Hospital in Baltimore. [5 Myths About Suicide, Debunked]

The efforts needed include identifying those at risk, removing their means of suicide and providing access to help, an effort that increasingly relies on technology to meet people where they are.

Those data corresponded to increases in military suicides as well as increases in teen suicides and a steady climb in suicides of people ages 45 to 64. Rates are highest in the "suicide belt" of the American West and lowest in the Northeast.

The demographics of suicide paint a portrait of those most at risk: white men over 60 with access to firearms. Self-inflicted shootings are the method of half of completed suicides, according to the most recent Centers for Disease Control and Prevention (CDC) data. For reasons no one fully understands, Kaplin told Live Science, African- American women are the least likely of any demographic group to commit suicide.

There are other mysteries about self-inflicted deaths: Around the world, they tend to peak in spring, for example. But perhaps the most frustrating is the mystery of why some people become suicidal in the first place. [Suicide: Red Flags and How to Help]

"Suicides, by and large, are very impulsive behaviors," said Dr. C. Edward Coffey, the CEO of behavioral health at Henry Ford Hospital in Detroit. "Patients will tell you, 'The notion is always in the back of my mind, it's kind of always there, but most of the time it's not very strong and I don't pay it any attention.' But every now and then, that notion can bubble up to the top."

The vast majority — 90 percent or more — of people who are suicidal have a diagnosable mental illness, often depression. But predicting whether any given person with depression, bipolar disorder or another mental illness will commit suicide is difficult. Suicide may be all too common, but it's also relatively rare: In 2010, about 38,000 people out of a U.S. population of about 308 million committed suicide.

"Anything with that low a base rate is tough [to predict]," said Thomas Joiner, a psychologist at Florida State University and the author of "Why People Die By Suicide" (Harvard University Press, 2005).

The stigma surrounding suicide can sometimes stymie treatment. It's hard to hear a friend or relative discuss wanting to kill themselves or talk about wanting to end their pain. But in 50 percent to 75 percent of cases, people who attempt suicide signal their intentions beforehand, according to the American Foundation for Suicide Prevention. Taking these signals seriously can help. [10 Stigmatized Health Disorders]

Researchers are now working on ways to make reaching out easier.

Scottye Cash, a professor of social work at The Ohio State University, has found that troubled adolescents often make their pain known on social networking sites. One analysis, published in the journal Cyberpsychology, Behavior and Social Networking in 2013, found heart-wrenching missives related to suicide posted on MySpace. "[H]ey yeah well right know about this seconde [sic] I want to die," read one representative comment. "Just want to not be here any more."

This use of technology has researchers who work with teens focusing on ways to find young people who are struggling. Nonprofit Reach Out has a website with forums and a weekly text line. Crisis Text Line provides free, 24-hour-a-day help for teenagers in crisis.

"We know that adolescents typically don't even disclose stuff to health care providers," Cash told Live Science. Many find it easier to text than talk, she said. Studies in physicians' offices have found that teens also disclose their feelings more freely if given a questionnaire on a tablet rather than being asked by a nurse, she said.

Similar efforts are being made for adults. Johns Hopkins' Kaplin has invented a text-message based program that pings people every day and asks them their mood. They text back, and the information can be shared with doctors, family or friends. This moment-to-moment measurement enables doctors to see if treatments are working, or if a person is headed toward a crisis, Kaplin said.

Meanwhile, Mental Health of America, Texas, has created an app called "Hope Box," which allows users to make virtual scrapbooks of mood-lifters, such as pictures of loved ones, to have on hand if their mood spirals downward. The idea is to buy time and pull people out of the mental health crisis that precedes suicide, Joiner said.

"The theme cutting across studies is that there are precursors to suicide attempts and to deaths by suicide that are pretty identifiable and pretty modifiable," Joiner said.

The effectiveness of virtual outreach still needs to be tested. But the Henry Ford Hospital of Detroit offers a glimpse of what is possible, if suicidal people get the help they need.

In 2001, the hospital's behavioral health center won a grant from the Robert Wood Johnson Foundation as part of a larger initiative dubbed "Pursuing Perfection." Henry Ford's staff wanted to pursue perfect depression care, Coffey said. As the team discussed what perfect care would look like, one of the nurses suggested if they conducted perfect depression care, maybe no one would kill themselves.

"When she made the statement, our room went absolutely dead still," Coffey said. "No one said anything for several minutes."

A senior staffer broke the silence to say the goal was impossible. Suicide was inevitable — wasn't it?

But the goal was set.

"There has almost been in the field kind of a resignation that there is going to be a certain level of suicide, no matter what you do," Coffey said. "And we basically decided not to accept that premise."

Tackling such a major goal meant a reorganization of everything the clinic did. Knowing that a reduction of a few percentage points wasn't enough meant the hospital had to re-evaluate everything. One major change was in the way the staff talked about weapons with patients. Before launching the perfect care program, doctors might ask a suicidal patient once if he or she had access to firearms, which are a highly lethal method of suicide.

But once the program started, those conversations became more in-depth. First, the doctors would ask their patients and their families about weapons. If they said there were none in the home, "We'd say, 'Okay, great, but your homework is to go back, sweep the house and you've got to call me tonight,'" Coffey said. Often, the families would call back, shocked to report that an old shotgun had been found in the attic or that there were pistols stashed in forgotten places, he said.

Doctors would talk to suicidal patients about how they envisioned dying. Contrary to conventional wisdom, these discussions don't put thoughts in suicidal people's heads. Instead, they gave doctors ways to throw up roadblocks to the plans. If someone mentioned hanging themselves, for example, they'd be told to get the rope out of the house. The more barriers a person has to overcome, the harder it is for them to act on the suicidal impulse, Coffey said.

Another major change was making diagnosis and access to care easier. Most people who commit suicide have seen a doctor in the year before their deaths, Coffey said. But few are diagnosed with the mental disorder that will eventually kill them.

"We don't need an intellectual breakthrough, necessarily," Coffey said. "We know there are things to do better on the delivery side."

There have even been a few years, he said, when not a single patient has died by suicide.