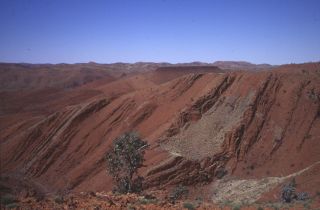 A layer of living scum only a cell thick may have covered parts of Earth more than 3 billion years ago, surviving with the help of nitrogen that these slimy microbes pulled from the atmosphere, a new study finds.

This finding suggests that nitrogen may have helped some planets, such as Mars, support life, researchers say.

Although life can exist without oxygen — and did, in the earliest days of life on Earth — without nitrogen, such organisms would be scarce. Nitrogen is needed to create proteins, DNA and RNA, and necessary for plants to grow and photosynthesize. It is an essential nutrient for all life on Earth and must have been available since its origins, researchers said. [7 Theories for the Origin of Life on Earth]

Past genetic analysis of nitrogen-fixing enzymes, which would have been produced by the microbes, placed their origin at between 2.2 billion and 1.5 billion years ago. Now, scientists looking at some of the planet's oldest rocks have found evidence that life was already practicing nitrogen fixation about 3.2 billion years ago, nearly three-quarters of the way back to the birth of the planet. [Photo Timeline: The Birth of Planet Earth]

"It is fascinating to imagine that this complex metabolic process has been operating on the Earth for over 3 billion years," lead study author Eva Stüeken, a geobiologist at the University of Washington in Seattle, told Live Science.

The scientists analyzed 52 rock samples ranging in age from 3.2 billion to 2.75 billion years old from what is now South Africa and northwestern Australia. These are some of the oldest and best-preserved rocks on Earth.

Even the oldest samples the researchers analyzed showed chemical evidence that life was fixing nitrogen. Nitrogen comes in two stable forms — the more common nitrogen-14 atom and the rarer, heavier nitrogen-15 atom — and the ratio of heavier to lighter nitrogen atoms seen in the rocks fits the pattern that results from nitrogen-fixing enzymes in microbes.

"People always had the idea that the really ancient biosphere was just tenuously clinging on to this inhospitable planet, and it wasn't until the emergence of nitrogen fixation that suddenly the biosphere became large and robust and diverse," study co-author Roger Buick, a geologist and astrobiologist at the University of Washington in Seattle, said in a statement. "Our work shows that there was no nitrogen crisis on the early Earth, and therefore it could have supported a fairly large and diverse biosphere."

Chemical analysis of the rocks suggests that nitrogen was being fixed by the most common of the three kinds of nitrogen-fixing enzymes that exist nowadays — an enzyme that contains the element molybdenum.

Molybdenum is now abundant because oxygen reacts with rocks to convert molybdenum into a soluble form that can wash into the ocean. However, its source on the ancient, oxygen-poor Earth, is uncertain. The researchers suggested that their findings may be evidence that some early life may have existed as single-celled layers on land. Those microbes would have emitted small amounts of oxygen as a byproduct when they broke down nitrogen, the researchers said. Then, the emitted oxygen would have reacted with any molybdenum in the rock, thus helping to release the element into the water.

"We'll never find any direct evidence of land scum one cell thick, but this might be giving us indirect evidence that the land was inhabited," Buick said in a statement. "Microbes could have crawled out of the ocean and lived in a slime layer on the rocks on land, even before 3.2 billion years ago."

The most important implication of the finding that nitrogen fixation evolved so early in Earth's history is that other planets that may have only been habitable for a short time, such as Mars, "could have also evolved a large biosphere," Buick told Live Science.

The scientists detailed their findings online Feb. 16 in the journal Nature.