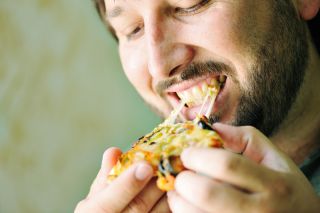 People who get "the munchies" after smoking marijuana may owe their sudden craving for food to certain neurons in the brain that are normally responsible for suppressing appetite, according to a new study on mice.

In the study, researchers stimulated the mice's appetites by manipulating the same cellular pathway as the one that mediates marijuana's effect the brain. The researchers also looked to see what was going on with the rest of the brain circuitry involved in appetite regulation in the mice whose hunger was stimulated.

Although the investigators anticipated that the neurons that typically suppress appetite would be "turned off" by the process of appetite stimulation, instead, they saw that the appetite-suppressing neurons were being activated. But they were using different chemical signals.

The researchers did not conduct human studies to confirm their findings in people, Horvath said. However, anecdotal reports suggest that people may get hungry after using marijuana, even shortly after eating a meal, he said. [11 Odd Facts About Marijuana]

"But, of course, we need to do further studies on those [mechanisms] in humans or other primates, to see whether this is the case there," Horvath said.

The new findings could one day be used to find new ways to treat certain appetite disorders that are common in cancer patients, the researchers said.

Cancer patients often lose their appetites because of the disease itself, or because of the treatments they receive, and may suffer a severe type of weight loss called cachexia. In previous research, the POMC neurons examined in the new study were linked to cachexia.

Researchers had also previously observed that, in people with cachexia, the neurons are activated to such an extent that that they completely suppress appetite and promote nausea, Horvath said.

The researchers would like to see if it is possible to somehow induce appetite in such patients through the mechanism shown in the new study, he said.

"The present data certainly make a clear case for the striking ability of cannabinoids to stimulate a small subset" of the neurons, and to increase food intake, Dr.Sachin Patel and Roger D. Cone, of the Vanderbilt University Medical Center in Nashville, Tennessee, who were not involved in the study, wrote in a related editorial.

However, it remains unclear exactly how cannabinoids activate the neurons, Patel and Cone wrote.

The study was published today (Feb. 18) in the journal Nature.