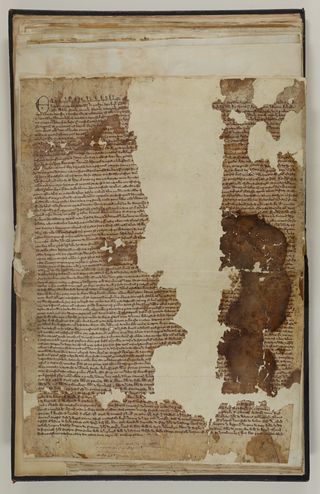 An original copy of the Magna Carta has been discovered in a scrapbook in Kent, England.

The tattered document dates back to 1300, 85 years after King John of England was compelled to sign the first agreement limiting the rights of kings. This version was issued by King Edward I (King John's grandson), who was under pressure from the church and the barons to reaffirm good governance, said Sophie Ambler, a research associate with the Magna Carta Project.

"Nobody knew it was there," Ambler said of the damaged document. "This Magna Carta had been stuck into a scrapbook by a Victorian official from the British Museum at the end of the 19th century."

The copy was then placed in the Sandwich archive in Kent, where it was forgotten, Ambler told Live Science. Its rediscovery was sparked by the efforts of researchers with the Magna Carta Project, who are investigating the history of the Magna Carta in the lead-up to its 800th anniversary this year. The leader of the project, the University of East Anglia's Nicholas Vincent, asked a historian in Kent to look up Sandwich's Charter of the Forest, a complementary document to the Magna Carta. In the process, the historian found the forgotten edition of the Magna Carta.

Often considered a precursor to modern constitutional law, the Magna Carta was first affirmed on June 15, 1215, by a beleaguered King John, who faced an uprising by a group of powerful barons upset over taxation. The charter limited the king's power and set limits on taxation, also establishing rights to justice. Four copies of the original 1215 Magna Carta survive, including a badly burnt document held at the British Library. [See Photos of the Burnt Magna Carta]

After King John, England's kings periodically reaffirmed and reissued the Magna Carta, as was the case with this version. The new copy brings the total number of surviving 13th-century versions to 24, Ambler said. The newly discovered edition is the seventh surviving copy from the year 1300.

The charter is more than 1.6 feet (0.5 meters) long, but about one-third of the text is missing, according to the Magna Carta Project. Water damage has eaten away at the paper, and the royal seal is missing. Nevertheless, the date of issue survives at the bottom of the document, Ambler said. Determining the authenticity of the charter was relatively straightforward, she added: The layout, handwriting and text all match what would be expected from a Magna Carta of this time.

The document's discovery in Sandwich reveals that copies of the Magna Carta were distributed more widely than ever known, Ambler said. Sandwich was what is known as a "Cinque Port," a coastal town given exemptions from certain taxes and oversight in return for maintaining ships for the kingdom's defense needs.

"The fact that we had one [delivered] to the Cinque ports adds a whole other audience" for the Magna Carta, Ambler said.

The fate of the newly discovered Magna Carta is not yet known, but it is likely to stay in Kent, Ambler said. The county council hopes to display the document as a tourist draw, she added. The Magna Carta is currently being held at the Kent History and Library Centre in Maidstone, Murray Evans, spokesman for the Kent County Council, told Live Science.