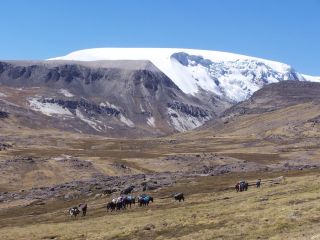 In the north dome of the Quelccaya Ice Cap, scientists found evidence for human-caused air pollution that predates the Industrial Revolution by more than 200 years.
(Image: © Paolo Gabrielli, courtesy of Ohio State University)

The researchers said it's the first clear evidence of man-made air pollution in South America from the time before the Industrial Revolution.

Though the imprint of metal-rich smog was discovered in Peru, the pollution likely originated hundreds of miles away, in what is now Bolivia, at the Potosí mountaintop silver mines. [Images: One-of-a-Kind Places on Earth]

"There is a long pre-industrial history of mining in Peru and Bolivia," said study author Paolo Gabrielli, a research scientist at the Byrd Polar and Climate Research Center at Ohio State University. But most of the previous evidence linking these activities to atmospheric pollution had been found in natural archives, such as lake sediment cores, which were located very close to the old mines, Gabrielli told Live Science in an email.

"Our study demonstrates that since the colonial time, mining and metallurgic activities performed by the Spanish did also have an impact on very distant areas," Gabrielli said.

At an altitude of about 13,120 feet (4,000 meters), the city of Potosí is designated a UNESCO World Heritage site, because of its rich industrial history. The Incas had been extracting and refining silver from Potosí for generations before the Spanish arrived. But during the colonial period, mining activity boomed, and Potosí became known as the largest source of silver in the world. By the 17th century, about 160,000 colonists lived in Potosí alongside about 13,500 indigenous people who were forced to work the mines under a system of mandatory labor, according to UNESCO. [See Photos of New UNESCO World Heritage Sites]

The success of the mines depended largely on amalgamation, a new technology that the Spanish introduced in 1572 to speed up silver production. That refining process involved grinding lead-rich silver ore into a powder and mixing it with mercury. Thick clouds of lead-laden dust were likely released into the atmosphere during milling, a key part of the amalgamation process, the researchers said.

"Colonial-era sources show that officials, both political and technological, were aware of possible pollution from the refining processes," said Kendall Brown, a history professor at Brigham Young University in Utah, who was not involved in the study. For instance, Francisco de Toledo, who governed the Viceroyalty of Peru from 1569 to 1581, ordered that amalgamators at Potosí build higher chimneys for their ovens to reduce the workers' risk of contamination, Brown said in an email.

Some of that pollution was apparently swept some 500 miles (800 km) northwest, where it settled on the Quelccaya Ice Cap in the Andes Mountains in southern Peru.

In 2003, Gabrielli and his colleagues pulled a long ice core from the Quelccaya Ice Cap to study the climatic changes in South America during the past 2,000 years. The researchers did not see a section of the ice core from the colonial era that was stained with soot; the ice actually looks translucent white. But a chemical analysis revealed that just before 1600, the Quelccaya started catching much larger quantities of metals, especially lead. This pollution persisted until the early 1800s, when the mining industry stagnated during the Latin American Wars of Independence, the researchers said.

"Until now, what we knew about pre-industrial atmospheric pollution was limited to the Northern Hemisphere," Gabrielli said. For example, he noted that "hardly detectable" 2,500-year-old traces of lead and copper in a Greenland ice core had been linked to mining by the ancient Greek and Roman civilizations.

"Our Peruvian record provides the first clear evidence of a large-scale pre-industrial signal of anthropogenic [human-caused] origin in the atmosphere of the Southern Hemisphere," Gabrielli said.

The colonial-era level of pollution, while significant, was still several times lower than the level of pollution during the 20th century — when people performed mining operations in huge open pits and when fossil fuel combustion changed the South American atmosphere more dramatically, Gabrielli said.

When did the Anthropocene begin?

Some scientists think humans have altered the planet so much — though agriculture, mining, fossil fuel production and other industrial activities — that we're now living in a new geological time period, dubbed the Anthropocene.

The starting point for this era, however, is debated. Sometimes it's thought to be the Industrial Revolution. Gabrielli said his team's findings demonstrate how difficult it is to define the Anthropocene, and the study's results suggest "this new epoch emerged discontinuously through space and time during human history."

Brown had a similar take.

"Clearly, colonial Spanish American mining was industrial in scale, and the belief that a dramatic man-made impact on the environment only began in the 18th century is a Euro-centric construct," Brown said in an email.

The findings were published in the journal Proceedings of the National Academy of Sciences.