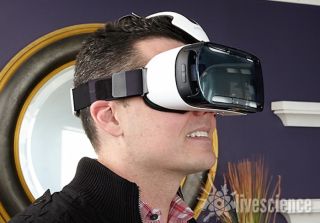 Samsung recently released its new virtual-reality headset, the Gear VR (powered by Oculus Rift), but the product comes with a foreboding list of possible health-related side effects.

The electronics giant cautions that people should stop using the Gear VR immediately if they experience seizures, loss of awareness, eye strain, nausea or "any symptoms similar to motion sickness." In addition, the device is not recommended for children younger than 13.

"Prolonged use should be avoided, as this could negatively impact hand-eye coordination, balance and multitasking ability," the lengthy disclaimer warns.

Samsung also says the device should not be used in a moving vehicle, although the Australian airline Qantas recently announced it will soon be providing the headsets to first-class passengers on flights. [Photos: Virtual Reality Puts Adults in a Child's World]

Virtual reality (VR) is becoming increasingly common in everything from entertainment to medicine to the military. But when it comes to understanding how VR affects the brain, scientists "don't really know what's going on," said Mayank Mehta, a neuroscientist at UCLA.

"I would say this is reason for caution, not business-as-usual," Mehta told Live Science.

Live Science reached out to Samsung, but a company spokesperson declined to comment.

Scientists have been aware of the potential side effects of VR systems for some time. A number of studies have examined what is sometimes referred to as "cybersickness" or "sim sickness" (short for simulation sickness). These feelings explain why some people feel sick in 3D movies.

"We think when you're walking around in the real world, you're getting input from multiple senses, and they're all in perfect agreement," said Mehta, who studies how virtual environments affect the brains of rats, at the level of individual neurons.

In virtual reality, however, "the brain is expecting everything to be in sync, but things are not in sync," he said; the virtual world is "incomplete."

In Mehta's studies, he and his colleagues built special setups with tiny treadmills that the animals could run on while exploring a virtual room. The rats appeared to behave normally in the setup, but when the researchers looked at the animals' brains, they "found really surprising stuff," Mehta said.

For example, in the hippocampus, a brain region involved in mapping an individual's location in space (as well as many other functions, ­including memory, learning and dreaming), 60 percent of neurons simply "shut down" while the animals were in virtual reality, Mehta found.

And it gets worse. Many of the neurons that don't shut down show abnormal patterns of activity. In the real world, these neurons create a map of space, but in the virtual world, "the map of space is totally destroyed," Mehta said.

Mehta suspects that the part of the brain involved in keeping track of an animal's location is so fine-tuned that it "expects" everything to be in sync. "I believe that's why these neurons are shutting down" in virtual reality, he said.

But is it bad for the animals that the hippocampus shuts down in virtual reality? "We don't know the long-term consequences," Mehta said.

"When millions of us are using virtual reality 6 to 7 hours a day," he said, "we may want to look [into] it, given that it's such a big change."