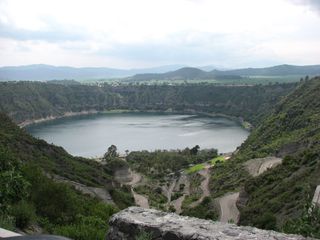 A lake near Cantona where researchers collected sediment samples to learn about the area's history of drought between A.D. 500 and A.D. 1150.
(Image: © Tripti Bhattacharya)

A once-thriving Mesoamerican metropolis dried up about 1,000 years ago when below-average rainfall triggered centuries-long droughts that largely prompted people to abandon the city for greener opportunities, a new study finds.

Scientists have long debated whether it was drought or cultural forces that led to the abandonment of Cantona, a once-fortified city located just east of modern-day Mexico City. Few details were known about its past climate, which prompted researchers to take a closer look at the weather conditions that affected the pre-Columbian city in Mesoamerica.

In its heyday, about 90,000 people lived in Cantona, which is located in a dry volcanic basin. The area provided vast amounts of valuable obsidian, volcanic glass used for trade and making sharp tools for hunting and farming. But people deserted the city between A.D. 900 and A.D. 1050, research shows. [History's 10 Most Overlooked Mysteries]

To investigate why, geographers assessed the climate before and after Cantona's collapse. They took sediment cores and samples from Aljojuca, a lake about 20 miles (32 kilometers) from the city.

As a closed lake basin, Aljojuca enabled the scientists to track the past climate in the region. The researchers examined the relationship between different oxygen isotopes, or variants of the element, in the water, and determined how much precipitation and evaporation was taking place at the lake. The ratio of the isotopes was high, indicating the area had drier summers, the scientists said. Analyses of other compounds in the sediment samples yielded similar results.

Overall, Cantona still had wet summers and dry winters, but its regular monsoon season was disturbed by frequent long-term droughts, which likely harmed the area's crops and water supply, the researchers said. Moreover, the droughts lasted hundreds of years.

A 650-year period of frequent droughts plagued the area from about A.D. 500 to about A.D. 1150, they found. This dry period wasn't isolated, but part of a period of droughts in modern-day Mexico's highlands that lasted from about 200 B.C. until A.D. 1300, just before the Aztec empire took power.

"The decline of Cantonaoccurred during this dry interval, and we conclude that climate change probably played a role, at least towards the end of the city's existence," lead researcher Tripti Bhattacharya, a graduate student of geography at the University of California, Berkeley, said in a statement.

Yet, Cantona's population actually grew during the early part of the dry period. It's possible that political turmoil and droughts elsewhere drove more people to the fortified city, Bhattacharya said.

"In a sense the area became important because of the increased frequency of drought," Roger Byrne, an associate professor of geography at the University of California, Berkeley, said in a statement. "But when the droughts continued on such a scale, the subsistence base for the whole area changed and people just had to leave. The city was abandoned."

The study was published online Jan. 26 in the journal the Proceedings of the National Academy of Sciences.