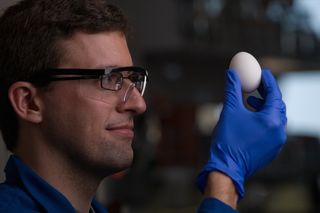 Scientists have figured out a way to do something that seems impossible: unboil an egg. But strange as it may sound, the feat doesn't defy basic laws of science.

When you boil an egg, the proteins unfold and refold into a more tangled, disordered form. But in a new study, a group of researchers found a way to pull apart the proteins in cooked egg whites, and allow them to refold into their original shape.

The finding could dramatically reduce the cost of cancer treatments and food production, the scientists reported yesterday (Jan. 27) in the journal ChemBioChem. [Science You Can Eat: 10 Things You Didn't Know About Food]

"Yes, we have invented a way to unboil a hen egg," study co-author Gregory Weiss, a biochemist at the University of California, Irvine, said in a statement.

In their experiment, Weiss and his colleagues started with an egg white that had been boiled for 20 minutes at 194 degrees Fahrenheit (90 degrees Celsius), until its proteins became tangled clumps. Then they added a substance that ate away at the egg white, effectively liquefying it. Next, they used a machine called a vortex fluid device, designed by Weiss' colleagues at Flinders University in Australia, which used the shearing forces  in thin, microfluidic films to shape the egg white proteins back into their untangled form.

Physicists often use cooking eggs as a metaphor to explain the second law of thermodynamics, which states that the degree of disorder, or entropy, in a system of the universe will always increase. For example, once you scramble an egg, it's basically impossible to separate the yolk from the egg white again, because it would be going from a less ordered state to a more ordered one.

At first glance, Weiss' experiment may appear to defy this law, because an unboiled egg is more ordered than a boiled one, so the entropy should be decreasing. But in fact, the process of unboiling the egg produces entropy in the form of heat, offsetting the decrease in entropy, Weiss told Live Science. So the entropy of the universe still increases, he said.

Physics aside, the unboiling technique could be useful in a lot of pharmaceutical and biomedical applications, the researchers said. Proteins often "misfold"into useless shapes when they are formed, but if scientists could refold them again, it could save money for drug development.

Traditional methods of recovering the misfolded proteins are expensive and time-consuming, Weiss said. By contrast, his unboiling technique takes only a few minutes — thousands of times faster than what was possible before.

For example, drug companies often make cancer antibodies in expensive hamster ovary cells, because they don't often create misfolded proteins. If, instead, these companies could use proteins from cheaper yeast or E. coli cells, it could make cancer treatments more affordable, the researchers said.

But the medical industry isn't the only one that stands to gain from the findings. Cheese-making and other industries could also benefit from the unboiling technique, the researchers said. UC Irvine has filed for a patent, and is working with potential commercial partners, they added.