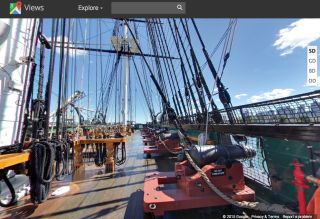 A screenshot of the USS Constitution pierside in Charlestown, Massachusetts, from Google Maps Street View. The naval ship is the latest landmark added to Google's Street View feature, and virtual visitors can explore both above- and below-decks.
(Image: © Stephanie Pappas via Google Maps)

Google published the 360-degree virtual tour Tuesday (Jan. 20), using pictures taken in the fall of 2014. The ship, nicknamed Old Ironsides, launched in 1797 and was named by President George Washington himself. The USS Constitution became famous during the War of 1812, when it defeated the British ship HMS Guerriere.

More than 200 years later, the USS Constitution is in need of some TLC. The ship is set to move to dry dock in March for major restoration work, including the replacement of its renowned copper siding, according to the U.S. Navy. Anticipating this work, Google and the Navy collaborated to photograph Old Ironsides at its usual berth in Charlestown Navy Yard in Massachusetts. [7 Amazing Places to Visit with Google Street View]

"The timing was ideal," Cmdr. Sean Kearns, the commanding officer of the Constitution, said in a statement. "It enabled Google to photograph the ship pierside in her normal fully-rigged configuration before we down-rig the ship and move her into dry dock."

The new virtual tour shows the Constitution on a blue-sky day in Charlestown, with panoramas of the ship's spar deck, gun deck, berth deck and orlop deck. Replica guns are visible on the gun deck, while hammocks can be seen hanging in the berth deck. The orlop deck is the lowest deck on the ship.

The Constitution is typically open to tourists year-round, but will be inaccessible for the estimated three years that it will spend in dry dock.

"This effort is particularly exciting because not only will it allow the public to go on a virtual tour to areas of the ship that will not be accessible while Old Ironsides is in dry dock, it will also bring this virtual tour experience to millions of people worldwide who might otherwise never get the chance to visit the ship in person," Kearns said.

Google Street View has moved far beyond its original purview of photographing the highways and byways of the United States. Street View is now available in more than 64 countries, and Google has also documented coral reefs, raging rivers and even polar bears in their natural habitat.

Google Maps users can also take virtual tours of such landmarks as the Taj Mahal and the Louvre Museum in France, as well as Egypt's archaeological wonders. Other not-quite-on-the-street views include Congaree National Park in South Carolina, the Statue of Liberty National Monument in New York, Mount Rushmore in South Dakota, St. Louis' Gateway Arch and the Memphis Zoo.

Nor is the USS Constitution the only ship featured on Google's Street View. Google Maps has previously photographed the USS North Carolina, a World War II battleship that is now a museum ship in Wilmington, North Carolina, and the USS Lexington, an aircraft carrier that is now a museum ship in Corpus Christi, Texas. Google Maps users can also tour the SS United States, a luxury liner built in 1952 that is now docked in Philadelphia.

The virtual tour of the USS Constitution can be viewed as part of the Google Maps Street View "U.S. Highlights."