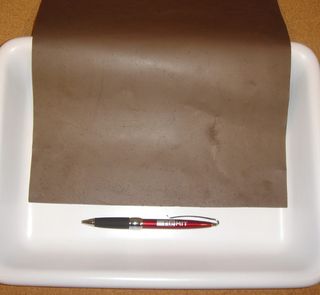 A swatch of MIT's new oil-absorbing nanowire mesh next to a pen for scale.
(Image: © Francesco Stellacci, MIT, and Nature Nanotechnology)

A mat of nanowires with the touch and feel of paper could be an important new tool in the cleanup of oil and other organic pollutants, scientists announced today.

MIT researchers and colleagues say they have created a membrane that can absorb up to 20 times its weight in oil, and can be recycled many times for future use. The oil itself can also be recovered.

Some 200,000 tons of oil have already been spilled at sea since the start of the decade.

“What we found is that we can make 'paper' from an interwoven mesh of nanowires that is able to selectively absorb hydrophobic liquids — oil-like liquids — from water,” said Francesco Stellacci, an associate professor in the Department of Materials Science and Engineering and leader of the work.

The results are detailed in the May 30 online issue of Nature Nanotechnology.

In addition to its environmental applications, the nanowire paper could also impact filtering and the purification of water, said Jing Kong, an assistant professor of electrical engineering in the Department of Electrical Engineering and Computer Science and one of Stellacci's colleagues on the work. She noted that it could also be inexpensive to produce because the nanowires of which it is composed can be fabricated in larger quantities than other nanomaterials.

Stellacci explained that there are other materials that can absorb oils from water, “but their selectivity is not as high as ours.” In other words, conventional materials still absorb some water, making them less efficient at capturing the contaminant.

The new material appears to be completely impervious to water. “Our material can be left in water a month or two, and when you take it out it's still dry,” Stellacci said. “But at the same time, if that water contains some hydrophobic contaminants, they will get absorbed.”

Made of potassium manganese oxide, the nanowires are stable at high temperatures. As a result, oil within a loaded membrane can be removed by heating above the boiling point of oil. The oil evaporates and can be condensed back into a liquid. The membrane — and oil — can be used again.

Two key properties make the system work. First, the nanowires form a spaghetti-like mat with many tiny pores that make for good capillarity, or the ability to absorb liquids. Second, a water-repelling coating keeps water from penetrating into the membrane. Oil, however, isn't affected, and seeps into the membrane.

The membrane is created by the same general technique as its low-tech cousin, paper. “We make a suspension of nanowires, like a suspension of cellulose [the key component of paper], dry it on a non-sticking plate, and we get pretty much the same results,” Stellacci said.

In a commentary accompanying the Nature Nanotechnology paper, Joerg Lahann of the University of Michigan concluded: “Stellacci and co-workers have provided an example of a nanomaterial that has been rationally designed to address a major environmental challenge.”