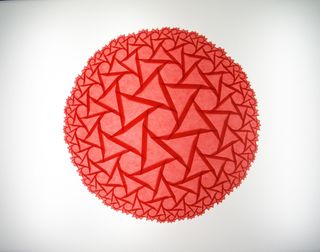 Robert J. Lang is an origami artist and the author of numerous books on paper folding, including "Folding Paper: The Infinite Possibilities of Origami" (Tuttle Origami Books, 2013), co-authored with Meher McArthur. He contributed these images to Live Science's Expert Voices: Op-Ed & Insights.

Origami artist Robert J. Lang has spent the last four decades mastering the art, and mathematics, of origami. This gallery features an assortment of some of the hundreds of pieces he has created, some of which have been featured in automobile advertisements and the film "Between the Folds." View more of his art, and the crease patterns for many of the pieces, at http://www.langorigami.com/. (Image Credits: Robert J. Lang.)

Folded: 1990 Composed: 1987 Dimensions: 5" Medium: One uncut square of kami "A trip through Scotland in 1987 persuaded me that the color change was an essential component of the subject for this design."

Dimensions: 24" Medium: 16 uncut squares of Wyndstone "Marble" paper "This model was inspired by the brilliant Tyrannosaurus Rex of the late Issei Yoshino."