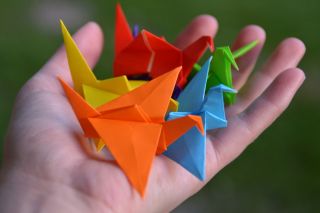 Paper folding may look like art, but it’s all about the math.
(Image: © Mina, CC BY-NC-ND)

Origami is the ancient Japanese art of paper folding. One uncut square of paper can, in the hands of an origami artist, be folded into a bird, a frog, a sailboat, or a Japanese samurai helmet beetle. Origami can be extraordinarily complicated and intricate.

The art of origami has been going through a renaissance over the past 30 years, with new designs being created at ever-increasing levels of complexity. It’s no coincidence that this rise in origami complexity has emerged at the same time scientists, mathematicians and origami artists themselves have been discovering more and more of the mathematical rules that govern how paper folding works.

Indeed, if you take an origami model, of a bird for example, and carefully unfold it, you’ll see the pattern of creases that act as a blueprint for the model. This crease pattern contains the secret of how the paper is able to fold into the bird – and that secret is math. In theory, we could use this crease pattern to determine exactly how the paper should fold up and what shape it will form – if, that is, we understood all the secret rules of paper folding.

Reading between the creases

At heart, mathematics is about understanding the rules and patterns of the universe, be they patterns in numbers, in the stock market, or in nature. In the case of origami, we need to look at the geometry of the crease pattern, where the lines intersect, what angles they form, and in what direction the creases fold: are they valley creases or mountain creases?

Most traditional origami models fold flat, meaning you could press the model in a book without crumpling it. It turns out that the crease patterns of flat origami models have some very special properties. One of them is called Maekawa’s Theorem: at every vertex where creases intersect in a flat origami crease pattern, the difference between the number of mountain and valley creases is always two. So, at a vertex you could have 5 mountains and 3 valleys, but never 6 mountains and 2 valleys, for example.

Beyond art to applications

In the 1970s, Japanese astrophysicist Koryo Miura invented his Miura map fold, also known as the Miura-ori. It’s an example of an origami tesselation, where one shape is repeated over and over, with no gaps, across a whole surface. In this case, the crease pattern is a tiling of parallelograms laid out so the lines of the tiling also obey the rules of flat-folded origami. Dr. Miura chose the mountains and valleys of his crease pattern so that the model would open and close very easily.

This crease pattern makes a very good alternative for folding a map, since it opens and closes so easily. But Dr. Miura used this design as a way to deploy large solar panels into outer space. Think of each parallelogram as a solar cell, all of which are then connected by hinges. The array can then fold up into a small package to be put on a space satellite before being launched on a rocket. Once in space it could be opened by a simple expansion rod without the help of human hands.

The Miura map fold has inspired a lot of researchers to investigate how it works, its properties, and how it can be used. For example, I’ve worked with a team including researchers from the University of Massachusetts-Amherst and Cornell University to study the Miura map fold as a mechanical device; how much force is required to compress the fold, and how much does it spring back when released? In Science, we reported how we can change this behavior by introducing defects into the Miura map fold, say by poking some of the vertices the other way. An example is shown below.

Our group has also been studying self-folding. We’ve made materials that fold themselves, which has been a topic of interest to other groups as well. Ryan Hayward’s group at the Conte National Center for Polymer Research has developed a way to make microscopic gel sheets swell along crease lines when heated. Their methods can make a microscopic crane:

This crane could be the smallest folded crane ever made! The polymer self-folding gel can make very complicated designs, like this three-dimensional octahedron-tetrahedron truss tessellation:

Such tiny self-folding gel objects might someday be used in bio-engineering. Imagine a toxic anticancer drug being enclosed in a self-folding origami ball, where the ball is programmed to unfold only when it comes in contact with a tumor. Then the drug can be delivered exactly to the tumor without poisoning other parts of the patient’s body.

None of these origami applications would be possible without understanding the mathematical rules behind origami. It is a great example of how math – and origami – can be found in unexpected places.