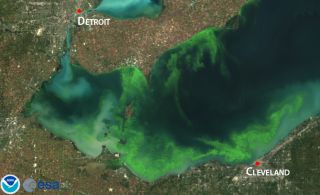 Satellite image of a toxic algae bloom in Lake Erie in 2011, one of the worst blooms in recent years.
(Image: © MERIS/ESA, processed by NOAA/NOS/NCCOS)

The lake's central dead zones are most strongly linked to drought years, when rivers that bring water into the lake run lower, researchers reported today (Jan. 6) in the journal Environmental Science & Toxicology. Conversely, the toxic algae blooms in west Lake Erie algae form more readily during wet years, and especially when intense spring storms wash fertilizer from farms into the lake. The researchers ruled out any link between the western basin's algal blooms and the central dead zones.

The algal blooms can be a problem for people living near the lake, because some kinds of algae emit toxins that irritate the nerves and organs of humans and other animals. Last year, dangerous levels of one algal toxin shut down the drinking water supply of the city of Toledo, Ohio, for three days in August 2014.

Despite the differences, both of Lake Erie's environmental problems are ultimately caused by agricultural runoff and human activity, which result in too much phosphorous entering the lake, said study co-author Anna Michalak, an earth scientist at the Carnegie Institution of Science at Stanford University in California. Michalak and her colleagues are examining how climate change is likely to worsen Lake Erie's environmental issues. Climate models predict that in the Great Lakes region, extreme events such as powerful thunderstorms and droughts will happen more often, but the total amount of precipitation will stay about the same. [Photos of the Great Lakes: North America's 'Third Coast']

"It's the way in which the water comes that will change, and that can lead to very different but quite negative impacts on the water quality in Lake Erie," Michalak told Live Science.

To examine why dead zones develop in Lake Erie, lead study author Yuntao Zhou looked at historical weather records, data on lake and river conditions and other factors. Zhou and the study co-authors  identified four triggers for big dead zones in the middle part of the lake.

"We were surprised by the [impact] of the northwesterly winds, but now it makes a logical story when you realize where the nutrients are coming from," Michalak said. "[These results] show how what we do as human beings really causes different impacts depending on meteorology conditions."

For instance, in 2011, heavy spring storms triggered a record-setting algal bloom in west Lake Erie, but that year there was a relatively small dead zone in the lake, the study reports. In contrast, the following year saw one of biggest droughts to hit the United States in 50 years. The record-low river flow into Lake Erie created a record-size dead zone in the lake's central basin.

"The dead zone in 2012 was the largest we've ever seen," Michalak said, but 2012 was a mild algal bloom year, according to the study.

Dead zones in central Lake Erie may form in two ways, the researchers found. In some cases, after an algae bloom in the central basin dies off, the decomposition process uses up the oxygen in the water simply because of the bloom's sheer size.

A dead zone can also form when the lake water is stratified by temperature, with warm water on top of cold water. This layering stops the water from turning over easily, and the cold water becomes oxygen poor. Sluggish winds and parched rivers both promote stratification.