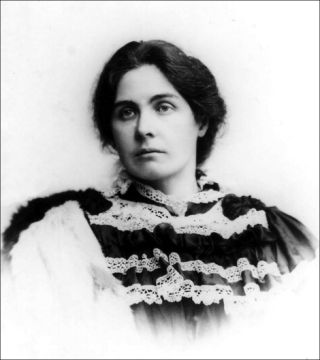 Constance Wilde — the wife of 19th century Irish writer Oscar Wilde — suffered from a mysterious illness during the last decade of her life. A new analysis of her unpublished letters suggests that she most likely had multiple sclerosis.

The diagnosis, published today (Jan. 2) in the medical journal The Lancet, comes 116 years after Constance's death at age 40. At the time she died, Constance was living in exile in Genoa, Italy, with her two sons. They had left London and changed their surname to "Holland" to escape the scandal surrounding her husband's imprisonment for homosexual acts in 1895.

Constance — who was an author in her own right and a champion of women's rights — started experiencing medical troubles in 1889, with lameness in her right leg that forced her to use a walking stick, according to the report. By the 1890s, she was suffering from bouts of severe pain, especially in her arms, head and back. In a letter that dates to sometime during the winter of 1894–1895, she wrote, "I am alright when I don't walk, but then I can't go thro' life sitting on a chair especially with two boys to amuse." [27 Oddest Medical Cases]

Her mobility worsened, but the nature of her illness eluded doctors. She once wrote, in 1896, "I am tired of doctors and no doctor finding out what to do with me." The end of her life was marked by extreme fatigue, and the left side of her face became paralyzed.

These symptoms are described in dozens of private letters and other papers held by Merlin Holland, the grandson of Constance and Oscar Wilde. Researcher Ashley Robins, of the University of Cape Town Medical School in South Africa, recently examined those documents and concluded that Constance suffered from multiple sclerosis, also known as MS.

Multiple sclerosis is a condition in which the body's immune system attacks the protective coating around the nerve fibers in the central nervous system, leading to an array of neurological symptoms. The cause of MS remains unknown, and there is still no cure for the condition, though there are some therapies today to help treat patients' symptoms.

The earliest clinical reports of multiple sclerosis cropped up in medical literature in the late 1860s and 1870s. An account of the disease was even included in the 1888 edition of Sir William Gowers' influential neurology textbook. Gowers, however, acknowledged that the condition was identified only recently and labeled it "Disseminated or Insular Sclerosis," according to Robins' report.

Constance's doctors may not have been aware of this newly identified diagnosis, Robins wrote. A better understanding of the disease might have spared Constance from an early death.

In April 1898, gynecologist Luigi Maria Bossi, who had a private clinic in Genoa, recommended surgery to relieve Constance's bladder problems. Bossi speculated that Constance had a tumor on her uterus, which was not only causing her urinary difficulties but also compressing the nerves of her thigh, resulting in leg weakness.

Constance died just days after the operation. In hindsight, it seems likely that the apparent pressure on Constance's bladder was actually a neurological symptom, caused by multiple sclerosis, Robins wrote.