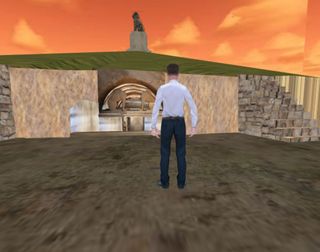 You might not be able to physically step inside the monumental tomb discovered this past summer in Amphipolis, Greece, but there are plenty of unofficial places to go on the Internet to pretend you're doing just that.

The tantalizing finds at Amphipolis have spawned a media frenzy, as well as a cottage industry of artistic reconstructions online. You can virtually stomp on a 2,300-year-old mosaic on amfipoli-news.com. You can use your mouse to rotate a model of the burial complex on theamphipolistomb.com. Type "Amphipolis" into the search bar on YouTube and there's a multitude of 3D renderings to explore.

None of these virtual worlds are affiliated with the Greek Ministry of Culture, the government body in charge of the official excavation. Rather, most of them seem to be made by 3D designers and artists hoping to be part of a once-in-a-generation discovery from the era of Alexander the Great. [See Photos from the Amphipolis Excavation]

Nikolaos Alexandrou, who now lives in Rome but was born about an hour and a half from Amphipolis, told Live Science that he started making a model of the tomb as a personal project.

In July, Alexandrou graduated from the University of L'Aquila in Italy with a master's degree in architectural civil engineering. A month later, excavators at Amphipolis revealed the arched entrance to the tomb, guarded by two broken sphinxes. Greek Prime Minister Antonis Samaras toured the site, and later told reporters he was standing in front of an "extremely important discovery."

Alexandrou said he had previously created 3D renderings of buildings, but not archaeological ruins. As the dig became a major news story, Alexandrou tried his hand at a reconstruction of Amphipolis based on images and drawings released by the Ministry of Culture. He was pleased with the results and thought others might be interested in seeing his model.

"I thought it would be great to promote the Greek heritage," Alexandrou said. "So I decided to upload this stuff to YouTube."

The first video Alexandrou posted in mid-October has been viewed about 200,000 times as of this writing. Fans of the work asked Alexandrou to make more models, recreating the broken arms of the site's two female statues (called caryatids) and filling in the missing portion of the stunning mosaic.  He obliged with a handful of new videos that restore the monument to what he imagines its original state was (with some modern touches, like museum-quality lighting).

Dimitrios Tsalkanis, a 3D artist based in Athens, might be one of the newest members to the club of Amphipolis artists. Tsalkanis previously created a website (www.ancientathens3d.com) to share his reconstructions of ancient Athens. He told Live Science in an email that he thought tackling the Amphipolis tomb would be an "intriguing and interesting challenge," and he uploaded his video on Dec. 13.

Tsalkanis emphasized that his model is an artistic reconstruction, not an archaeological one. He took some liberties with the touches of paint he added to the tomb's sphinxes and statues. However, he said his choices were based on studies about the colors Greeks were using during this period, as well as the traces of paint archaeologists have documented at Amphipolis.

"We understand from the people around us, the Greek people, that this is a big thing for them," said Dimitris Aggeloudis, a web developer in Greece. He is one of the minds behind amfipoli-news.com, one of a handful of Amphipolis-centric news operations that sprang to life after the tomb was uncovered. The website offers its own 3D tour of the tomb, including an interactive portal where you can guide a male avatar through the tomb using your arrow keys.

Aggeloudis and some friends launched their website in October after tracking the growing interest in the dig. In a conversation over Skype, Aggeloudis and Panagiotis Panagiotou, a student at the University of Thessaloniki who is in charge of the English portion of the website, said the tomb at Amphipolis is the biggest archaeological find in the region since the discovery of the royal Macedonian burials at Vergina, nearly 40 years ago.

In the fall of 1977, Greek archaeologist Manolis Andronikos found a gold-filled Macedonian tomb at Vergina, about 100 miles (160 kilometers) west of Amphipolis. Andronikos held a press conference and announced he had found the resting place of Alexander the Great's assassinated father, Philip II.

More than three decades later, Andronikos is a household name in the region. There is a bronze bust of the archaeologist outside the Museum of Thessaloniki, and a lounge named after him in the Thessaloniki airport. And yet, historians and archaeologists are still debating whether Andronikos accurately identified the occupant of the tomb as Phillip II. Other scholars have suggested that the tomb may have had a different occupant: Philip III Arrhidaeus, Alexander's half-brother, who was perhaps mentally disabled, and was executed in 317 B.C.

Likewise, the findings at Amphipolis have turned lead archaeologist Katerina Peristeri into a national celebrity, and her excavation has not been without controversy. It's unusual for an archaeological dig to attract so much attention in real time; many discoveries aren't brought to the public's awareness until after they are documented, analyzed and published in a scientific journal. Officials with the Greek Ministry of Culture have been careful about what information they released to the public, and their updates, at times, have created "unreasonable expectations" for the dig, said Tsalkanis.

Many are still holding out hope that the tomb at Amphipolis could be the long-lost resting place of Alexander the Great, though historical texts indicate he was eventually buried in Alexandria, Egypt, after he died in 323 B.C. This September, Greek media quoted the Greek Minister of Culture, Kostas Tasoulas, as saying that it would be "impossible" for Alexander to have been buried at Amphipolis. But a day later, Tasoulas backtracked on that statement, keeping the mystery alive. Other commentators have speculated that the bones found in the tomb might belong to one of Alexander's generals or family members.

Some of critics have accused Prime Minister Samaras' coalition government of using the tomb as a distraction amid economic trouble. In the same month that the tomb discovery was announced, Samaras was facing harsh criticism over an unpopular new property tax. Reuters reported on one cartoon that emerged in Greek media at the time, showing Samaras urging archaeologists to identify the person buried in the grave — but only to make him pay the property tax.

Tsalkanis said some of those controversies weighed on him as he made his 3D model.

"This whole situation had troubled me a lot before proceeding into the creation of this video," Tsalkanis said in an email. "But a monument's impact on society is always interesting to investigate, both at the time when it was built and also at the time it is being 'rediscovered.' So, I think that creating this 3D animation fits both aspects."

In Alexandrou's eyes, archaeological discoveries are a legitimate cause for a boost in morale. Ruins and tombs are big attractions for Greek's tourism industry, which provided 15.8 percent of Greece's GDP in 2011, according to a report from the Organization for Economic Co-operation and Development.

"If we don't use this, then what else? Every finding is another helper from the ancient Greeks," Alexandrou said.