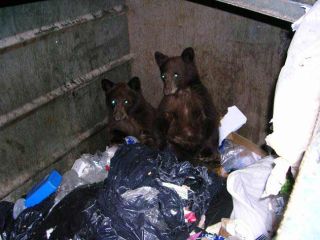 A camper's worst nightmare has become a homeowner's reality for many: Bears that once rummaged around campsites now dive into suburban dumpsters and trash cans, munching on more than picnic snacks.

In any case, scientists have wondered how animals learn to find and eat human food. Some researchers assumed bear cubs picked up this behavior from their mothers, but a new study may acquit mama bears.

Researchers found that black bears that steal human food are just as likely to form these habits on their own or pick them up from unrelated "bad influence" bears, as to learn them from their mothers. The scientists detailed their findings in the latest edition of the Journal of Mammalogy.

"Understanding how bears acquire behavior is important in conservation biology and devising strategies to minimize potential human-wildlife conflicts," said Wildlife Conservation Society (WCS) scientist Jon Beckmann, a co-author of the study. "According to our findings, bears that feed on human food and garbage are not always learning these habits from their mothers."

Distributed across much of North America, black bears — which average around 300 pounds in weight — become a problematic species for wildlife managers when they become accustomed to human sources of food, and the habit is a hard one to break. Bears that develop these tendencies often remain "problem" bears for human communities, leading to property damage, injuries to people, not to mention costly relocation and sometimes death for bears.

Working in the Lake Tahoe Basin on the California-Nevada border and California’s Yosemite National Park (where bears breaking into visitors' cars is commonplace), the researchers examined genetic and behavioral data for 116 black bears. The bears were classified as either food-conditioned (or hooked on human food) or non-food-conditioned (those bears that still forage on natural food sources). The study also focused on nine mother-offspring pairs to test the assumption that mother bears teach their cubs to invade garbage bins or homes.

The researchers found little evidence linking food-conditioned behavior to mother bears. Instead, it seems, bears may learn to seek out human food from other bears (not necessarily their relatives) or even just pick it up on their own, even without other bears around to set a bad example. More than half (five of nine) of the bears in the study had mothers who differed in behavior from them.

"These findings can help inform management strategies that would otherwise assume that cubs will always repeat the behaviors of food-conditioned mothers," said Jodi Hilty, director of WCS-North America. "Moving mothers and cubs may have only a limited effect in eliminating human-bear conflicts, which seem to be primarily driven by human food sources that are available to bears."

On the East Coast, WCS-Adirondacks has been supplying the High Peaks Wilderness Area in Upstate New York with bear-proof food canisters for campers to rent at local stores. A recent survey found that 95 percent of campers now use the canisters, and reports of conflicts between bears and campers have declined significantly.