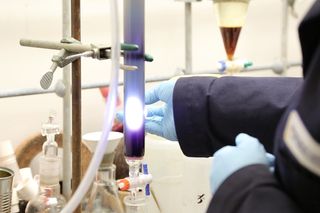 Carbon and hydrogen are the building blocks of life. Every living thing on this planet — every plant, every animal — is made mostly of these key elements.

With support from NSF, organic chemist Huw Davies and colleagues at Emory University have brought together an all-star team, including research faculty and students from universities around the United States and the world, to create the Center for Selective C-H Functionalization (CCHF). The goal is simple: Reinvent how chemicals are made.

The CCHF will develop new ways to turn the once inert carbon-hydrogen bonds in organic molecules into chemically active centers to attach new molecular pieces with entirely new functions. To reach that goal, the research team is discovering how to craft novel, selective, catalysts to manipulate the molecules and developing the complex models that will guide how chemists use the new approaches. Ultimately, the research will lead to new pharmaceuticals , new techniques to prepare materials, and a new understanding of the natural world, in a more streamlined and environmentally sustainable fashion.

Below, Davies provides a Q+A with context for the research and the center.

NSF: How does organic chemistry differ from the general chemistry most people are familiar with?

Huw Davies: The first thing that many people think of when you talk about organic chemistry is the "organic" label that is plastered all over foods and cosmetics. That is not organic chemistry. The name organic has its origins in research that was done more than 100 years ago looking at the chemistry of living entities, both animals and plants. As scientists came to better understand those processes, the scope of this field expanded. Today, organic chemistry deals with compounds that are based primarily on the elements carbon and hydrogen, but also incorporate oxygen, nitrogen, sulfur, phosphorous, sodium and potassium. This small subset of elements, a fraction of the Periodic Table, along with a sprinkling of a few others, underpins much of modern science — from molecular probes that map biological processes, to pharmaceutical agents, to thin films that provide the displays in large screen monitors and smart phones.

NSF: How are organic molecules built?

H.D.: Hydrocarbons represent one of the most basic classes of organic molecules. In those molecules, each carbon atom forms four bonds to other carbon or hydrogen atoms. (A bond represents the sharing of electrons between two atoms, effectively the "glue" that holds the atoms together to form a molecule.) A "functional group" replaces one or more of the hydrogen atoms with a different atom, or group of atoms, such as oxygen, nitrogen or sulfur. Some common functional groups include alcohols, amines and acids [and they perform a specific function]. Compared to the carbon and hydrogen atoms, these functional groups are much more reactive, which means they can either donate or accept electrons from within the same molecule or from another molecule, resulting in the forming and/or breaking of new bonds. These reactions between functional groups are used to join together small and simple molecules to build the large complex molecules needed in pharmaceuticals or materials science.

NSF: What is the field of C-H functionalization and what are some of the impacts it could have?

H.D.: C-H functionalization completely changes the conventional logic of organic chemistry . It describes a new way of putting together organic molecules that removes the reliance on functional groups. Traditionally to make a new bond between two molecules, the new bond forms between two functional groups. One, or both, of these groups is removed from the molecule during this process, which is what generates waste products in chemical reactions. In C-H functionalization, the new bond can form between simple, ubiquitous C-H bonds. This has a number of significant advantages; there is significantly less waste generated, functional groups don't have to be made before the reaction can take place and novel, previously inaccessible, methods for putting new molecules together are now possible.

NSF: What are some of the long-established lab methods that this new research could eliminate?

H.D.: C-H Functionalization has the potential to broadly impact organic chemistry. A particularly effective example is a chemical technology called "cross-coupling," the joining together of two benzene derivatives by employing a metal. For example, using a metal such as palladium or copper, one can accelerate the joining together of two benzene derivatives that contain halogen functional groups. The inventors of that technology were awarded the Nobel prize in 2010, and had a huge impact on the pharmaceutical world. The discovery of a facile technique to efficiently join two benzene derivatives together drove the development of many new pharmaceuticals, a case where the means defined the end. Previous to this work, the joining together of two such molecules required harsh reaction conditions, with temperatures over 100 oC, and extended reaction times, making them unsuitable for industrial applications. C-H functionalization can achieve the same transformation as cross-coupling, in a streamlined fashion, generating less waste and requiring fewer hazardous reagents.

NSF: How could this research lead to cleaner, more sustainable initiatives in the chemical world?

H.D.: The core concept that makes C-H functionalization possible is one of selective catalysis. A catalyst is a material that is added to a reaction that accelerates it, but is not consumed in the transformation, and is thus available to go on to perform the same transformation many times. Catalysts can be exceptionally sustainable because they can form fewer hazardous waste products , and because they don't disappear, can be used in very small amounts. Our center has developed a catalyst that can do 1 million turnovers, which means that for every 1 million new molecules made, only 1 molecule of the catalyst is required.

NSF: What are the agricultural implications for this research?

H.D.: The majority of agrochemicals, used to either modulate plant growth or control pests, are organic molecules. The development of C-H functionalization has the potential to not only streamline the synthesis of such compounds, but also reveal efficient routes to novel agents that offer these levels of control, which are currently either scientifically or commercially inaccessible.

NSF: Why does the center require a team of individuals from such a wide array of fields?

NSF: What are the next steps in your research?

H.D.: The ultimate goal of the CCHF is to bring C-H functionalization into the mainstream of organic chemistry, enabling peers in the scientific community to use this technology, applying it to the synthesis of pharmaceutical agents, using it synthesize materials. This will be achieved through pioneering catalyst design, development of new transformations and a deep understanding of this chemistry.