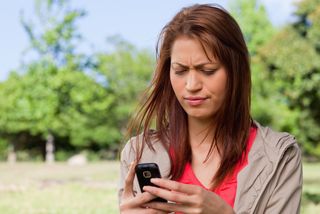 A woman's garbled text message to her son had an underlying message: She was having a stroke.

Her case, published last month in the journal BMJ Case Reports, is now the fourth reported incident in which garbled texting, similar to slurred speech, was a symptom of a stroke. Doctors are calling this a new phenomenon.

Clumsy thumbs and devious auto-correction aside, the inability to write a coherent text message is called dystextia, and it was first described as medical symptom in 2006, seen in people with migraine headaches. Texting requires the coordination of several brain regions. Thus, dystextia may be a sign of abnormal brain function that otherwise wouldn't be seen in a person speaking or  writing longhand, stroke experts say.

Its is not clear exactly what causes dystextia, but it includes disruption of multiple brain functions, including fine motor skills, said Dr. Samer Al-Hadidi, a medical resident at the Hurley Medical Center in Flint, Michigan, who treated the woman and is the lead author on the case report. [16 Oddest Medical Cases]

Dystexia is similar to aphasia, a language disorder often caused by stroke in which a person may be able to speak coherently but not read or write, or vise versa, Al-Hadidi said. "Aphasia is well described, and it [manifests itself in] different ways according to the area of the brain affected," Al-Hadidi said. In contrast, as a newly identified condition, dystextia remains poorly understood.

The first reported case in which dystextia was seen as a stroke symptom was published in the journal JAMA Neurology in December 2012. A 25-year-old pregnant woman was rushed to the emergency room upon sending her husband strange messages about their baby's due date, such as "everywhere thinging days nighing" followed by "some is where."  Her speech was mostly coherent.

It turned out that the woman was suffering from a mild stroke. She was treated successfully with blood thinners and ultimately delivered a healthy baby.

At the American Academy of Neuroscience annual meeting in 2013, doctors presented another case, dating back to 2011, of a 40-year-old man who similarly sent his wife a series of disjointed messages while on a short business trip. Doctors subsequently found that he could read, write and speak just fine. Yet when they asked him to precisely text the phrase "the doctor needs a new BlackBerry," the man typed "Tjhe Doctor nddds a new bb."

The man did not recognize his typing errors. A thorough examination with brain scans revealed that he had recently had a stroke, although it was unclear exactly when it happened.

In this latest case, a 61-year-old woman sent her son strange text, prompting him to call for an ambulance. The woman's text was nearly coherent, though, a series of three quick messages: "Oh honey your" followed by "I am weak" and then "I am out, don't know how sleep, can't sense, I can't type, lov you."

The wording is curiously similar to that of man on the business trip, who texted his wife: "Oh baby your" followed by "I am happy" and "I am out of it, just woke up, can't make sense."

The woman was treated at Hurley Medical Center and quickly recovered her ability to text. Her case underscores the importance of recognizing stroke symptoms and seeking medical help immediately, Al-Hadidi said. The sooner a stroke is detected and treated, the better the outcome, he said.

Garbled text messages could be valuable in treating patients. Because texts are time-stamped they can help doctors to narrow in on when a stroke occurred and to determine the best course of treatment, he said.