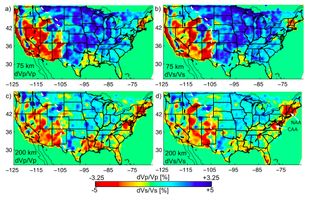 A continent-sized scan of North America is giving researchers the sharpest view yet of mysterious geological structures underneath the United States.

The impressive view comes from an ambitious experiment called EarthScope, which has scanned the country from California to Maine using hundreds of portable seismometers. (The next stop is Alaska.) Launched in 2004, the massive effort has already revealed new details about the geology of the western and central United States, such as the shape of Yellowstone's magma plume. Now, the first clear images of the entire continent are beginning to emerge, according to a study published Oct. 15 in the journal Geophysical Research Letters.

"This was the dream to start with," said Brandon Schmandt, lead study author and a seismologist at the University of New Mexico in Albuquerque.

The EarthScope process resembles snapping a CT scan of the Earth, with a field crew moving sensitive earthquake detectors across the surface and researchers constructing an image of the rocks below. [Image Gallery: This Millennium's Destructive Earthquakes]

In the new study, Schmandt and his co-author, Fan-Chi Lin of the University of Utah, built a detailed, 3D map of the Earth's upper mantle, which is the rocky layer between the crust and core. The results could help researchers solve some long-standing geologic puzzles. The mantle is not only a time capsule, preserving the history of crashing tectonic plates, but also a force that influences what happens at the surface.

Clues to geologic mysteries may lie hidden in the mantle, the study reports. One mystery is why there are a handful of 48-million-year-old volcanoes in Virginia, when no other volcanic features have formed on the East Coast since about 200 million years ago.

The East Coast has been a passive margin, with no colliding tectonic plates, for 200 million years, so the Virginia volcanoes are unusual features, Schmandt said. But it turns out that the mantle beneath the East Coast isn't as cold and dense as one might expect after so many millennia free from jostling.

The researchers found alternating zones within the mantle where earthquake waves shift gears, from fast-moving and slow-moving speeds and back..This differs from the more uniform mantle under the old and tectonically stable central United States. (Earthquake waves speed up and slow down when they hit rocks with different temperature, density or composition.)

The new model revealed that two of sites where seismic waves suddenly slow down match up with geological features on the Earth's surface. One is in the central Appalachians, centered directly below the Virginia volcanoes. The second, located in the northern Appalachians, lines up with a feature called the Great Meteor hotspot track in Canada, Schmandt said. The track is a chain of progressively younger volcanoes that starts in Canada and stretches out into the Atlantic Ocean.

Further work on the anomalies could help explain why Virginia's rare volcanoes appeared. For instance, Schmandt said he was impressed that 50 million years later, the mantle beneath the volcanoes is still altered by whatever process triggered the eruptions. "It's a little bit surprising to see these strong changes in a place that's been a passive margin for such a long time," Schmandt told Live Science.

The new data suggests a piece of North America was ripped out long ago, then later replaced by another drifting chunk, perhaps a piece of an island chain similar to Japan. "It really looks like a different type of lithosphere in there," Schmandt said. Fragments of islands and other continents that smashed onto North America can appear as hotter mantle regions beyond the outline of the original continent. [In Images: How North America Grew as a Continent]

Some of the clearest shapes in the new mantle map are ancient relics. Earlier studies have shown North America sits above a graveyard for discarded pieces of old ocean floor. The pieces of oceanic crust (or slabs) were consumed at a subduction zone offshore the West Coast. A subduction zone is where one plate sinks underneath another. "It's fascinating to see slabs that subducted 10 to 100 million years ago," Schmandt said. "It tells us what the [tectonic] driving forces were like in the past."

But beneath North America, the slabs of crust aren't sinking in the way scientists thought they would. Schmandt and Lin discovered fragments of old oceanic crust at about 310 miles (500 kilometers) depth under the central and eastern United States, whereas younger pieces of oceanic crust have dropped nearly twice that depth beneath the western United States. The researchers suggest a large piece of oceanic crust that subducted more than 40 million years ago broke into several large fragments, at least two of which foundered.

"Figuring out how those got there and whether they correspond to important events at the surface will be a good challenge," Schmandt said.

Editor's note: This story was updated Dec. 4 to correct the affiliation of Brandon Schmandt.