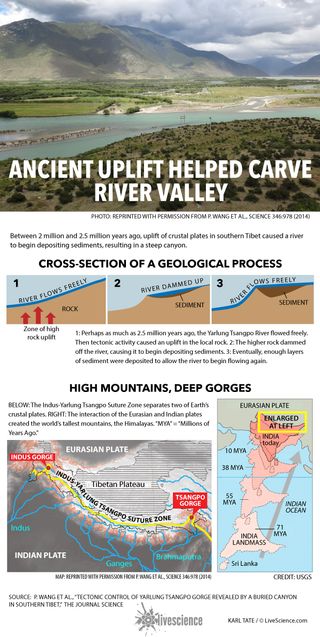 Between 2 million and 2.5 million years ago, uplift of crustal plates in southern Tibet caused a river to begin depositing sediments, resulting in a steep canyon.

Perhaps as much as 2.5 million years ago, the Yarlung Tsangpo River flowed freely. Then tectonic activity caused an uplift in the local rock. The higher rock dammed off the river, causing it to begin depositing sediments. Eventually, enough layers of sediment were deposited to allow the river to begin flowing again.

The Indus-Yarlung Tsangpo Suture Zone separates two of Earth’s crustal plates. The interaction of the Eurasian and Indian plates created the world’s tallest mountains, the Himalayas.