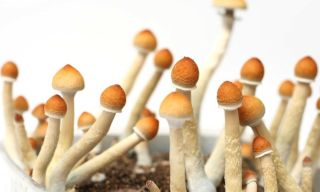 Many species of mushrooms contain hallucinogenic ingredients such as psilocybin
(Image: © gsplanet/Shutterstock)

Many of the drugs that treat mental health problems are discovered by serendipity, and because new drugs are scarce, researchers may need to look more closely at the possible psychiatric effects of existing prescription and illegal drugs, one scientist argues.

In an editorial published today (Nov. 12) in the journal Nature, Dr. David Nutt, a British psychiatrist, wrote that there is a crisis in the drug-discovery pipeline of mental health medicines. Scientific research could benefit from taking note of what people who are already using drugs say about their side effects; specifically, any unexpected positive effects that drugs have on mood and anxiety, he said.

"The drugs that we need to ease the burden of mental illness could be out there — we just need to look," wrote Nutt, who is a former drug adviser to the British government and a long-time critic of the government's existing drug policies.

Nutt cited the drug psilocybin, the psychedelic ingredient found in "magic" mushrooms, as an example of a long-used illegal drug that has recently been thought to hold mental health benefits. What started as anecdotal reports of the effects of psilocybin on mood has now led to the idea that the compound may be beneficial for treating depression, and a clinical trial is set to start in 2015. The trial will study whether the compound alleviates depression in people who haven't been helped by drugs that are currently approved to treat the disorder. [11 Odd Facts About 'Magic' Mushrooms]

Similarly, the animal tranquilizer Ketamine (sometimes called Special K when sold as a "street drug"), is now being studied for its potential in treating depression. Some psychiatrists already use this drug "off-label" to treat patients with severe depression.

Both banned drugs and prescription medicines should be looked at for their psychiatric effects, Nutt wrote in his editorial. "Millions of people take these compounds," Nutt said.

Surveys of recreational drug users could be taken to collect information about people's experience with such drugs and could increase the chances that researchers will discover unexpected drug effects, Nutt suggested.

Nutt acknowledged two problems with his idea. There could be political barriers to surveying drug users because such surveys may imply an endorsement of using illegal drugs. And drugs sold on the street may be tainted, or not even contain the chemicals they claim to have.

Moreover, some prescription medications have been found to hold promise for mental health disorders they were not intended to treat. For example, the antibiotic minocycline has emerged as a possible schizophrenia treatment after it improved mental health symptoms in two patients who took it as a treatment for infections, Nutt said. Similarly, the blood-clotting drug warfarin seems to relieve symptoms of schizophrenia.

These findings suggest that in the same way that people now report negative side effects of medications, they should be able to report a medication's positive but unexpected effects, Nutt said.

If a medication shows promise for treating a mental health condition, it can be studied more rapidly than a whole new drug, Nutt said. "Commonly used medicines are considered safe, so trials for psychiatric benefits could be fast-tracked."