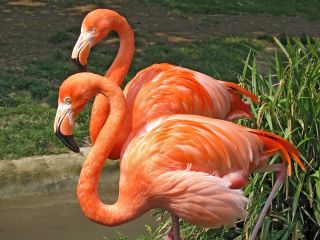 Flamingos are one of the most easily recognizable types of bird in the world thanks to their flamboyant feathers, which range from light pink to bright red. But are these birds' mating behaviors just as flashy as their looks?

Six species of flamingos exist today — four live in parts of South America, the Yucatán and along the Galapagos Islands, and two species can be found in Africa, the Middle East and India. The birds don't have a distinct mating season, and instead breed when water levels and food availability in the wetlands are just right, said ornithologist Juan Amat of the Doñana Biological Research Station in Spain.

Flamingos are highly social animals that live in huge colonies, often consisting of thousands of birds. But when the adults decide to mate, the entire colony doesn't commence with their courtship rituals all at once. "The flamingos display in groups, composed of tens to hundreds of individuals," Amat told Live Science.

To attract mates, both males and females participate in elaborate group dances, which consist of several different moves.

Their mating displays usually begin with the "head-flag," in which the flamingos call loudly while they extend their heads and wave them back and forth. The dancers then outstretch their necks and spread their wings to display their black flight feathers in a move dubbed the "wing-salute." The "inverted wing-salute" may follow — they angle their heads downward and their tails upward, allowing their black flight feathers to point up to the sky.

Other dance moves include the "twist-preen" (head twisted beneath a wing), the "wing-leg stretch" (outstretched leg and wing on one side of the body) and "marching" (quick, synchronized steps performed while clustered together and standing erect).

It's not clear how the flamingos choose their mates, or even if a flamingo's dance performance matters. "As far as I know, mate choice has not been studied in detail in any flamingo species," Amat said, adding that plumage color is likely a factor that contributes to mate choice. In fact, in a study published in 2011 in the journal Behavioral Ecology and Sociobiology, Amat and his colleagues found that flamingos apply "make-up" around breeding time to attract mates.

Flamingos get the vibrant colors of their feathers from pigmented compounds called carotenoids, which they co-opt from the algae and small invertebrates they eat. And like all birds, their tails contain glands that produce oil that they spread onto their wings with their beaks. These preen oils, Amat's team found, are rich in carotenoids, and the flamingos ramp-up their oil-applying behavior during the mating season. After their chicks hatch, the birds quickly lose the bright colors of their wings because they've stopped applying their make-up, the team reasoned.

Whatever the case, when a female is ready to mate, she will walk away from the dancing group and her chosen male will follow close behind. She will then stop walking, lower her head and spread her wings, inviting her mate to briefly mount her from behind and pass sperm from his cloaca (waste and reproductive orifice) to hers.

Interestingly, flamingos are generally monogamous, with mating pairs staying true to their partners and cooperatively building nests and incubating eggs — for that single season, at least. Most adults find new mates each year, Amat said.