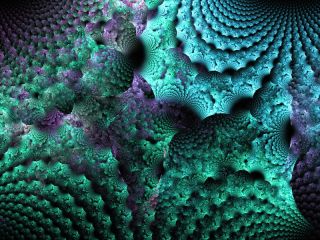 Magic mushrooms may give users trippy experiences by creating a hyperconnected brain.

The active ingredient in the psychedelic drug, psilocybin, seems to completely disrupt the normal communication networks in the brain, by connecting "brain regions that don't normally talk together," said study co-author Paul Expert, a physicist at King's College London.

The research, which was published today (Oct. 28) in the Journal of the Royal Society Interface, is part of a larger effort to understand how psychedelic drugs work, in the hopes that they could one day be used by psychiatrists — in carefully controlled settings — to treat conditions such as depression, Expert said. [Trippy Tales: The History of 8 Hallucinogens]

Psilocybin, the active ingredient in magic mushrooms, is best known for triggering vivid hallucinations. It can make colors seem oversaturated and dissolve the boundaries between objects.

But the drug also seems to have more long-lasting effects. Many people report intensely spiritual experiences while taking the drug, and some studies even suggest that one transcendent trip can alter people's personalities on a long-term basis, making those individuals more open to new experiences and more appreciative of art, curiosity and emotion.

People who experiment with psilocybin "report it as one of the most profound experiences they've had in their lives, even comparing it to the birth of their children," Expert told Live Science.

Scientists have long known that psilocybin binds to a receptor in the brain for serotonin, a brain chemical that plays a role in mood, appetite and sleep, but exactly how the drug transforms the whole brain's pattern of communication isn't clear.

In past work, Expert's colleagues had found that psilocybin spurred the brain into a more dreamlike state, and that the drug decreased brain activity.

In the current study, the team used functional magnetic resonance imaging (fMRI) to scan the brain activity of 15 healthy volunteers — once after they had taken a placebo, and once after they took the hallucinogen psilocybin. (The team chose only people who had reported past positive experiences with magic mushrooms to prevent them from panicking inside the claustrophobic MRI machines.)

The team then compared the brain activity of the individuals on and off the drug, and created a map of connections between different brain regions.

Psilocybin dramatically transformed the participants' brain organization, Expert said. With the drug, normally unconnected brain regions showed brain activity that was synchronized tightly in time. That suggested the drug was stimulating long-range connections the brain normally wouldn't make. After the drug wore off, brain activity went back to normal.

Psilocybin may create a brain state akin to synesthesia, a sensory effect in which one sense stimulus (such as a number) always gets paired in the brain with another (such as a color or a sound), the researchers wrote in the paper. People with synesthesia may see certain colors when they hear music, or always see the number 3 in yellow, for instance, Expert said.

The findings could help scientists who are studying the drug as a potential treatment for depression, Expert said. Past work has found that people tend to be happier even after using psilocybin just once, but scientists would need to get a much better picture of how the drug impacts the brain before using psilocybin to treat depression, Expert said.

The research could ultimately also help answer bigger questions of the mind, like how people construct a sense of self.

"Through studies such as these we can really begin to tackle the questions of how we achieve coherent experiences of ourselves in the world around us, and understand what makes this break down," said Mitul Mehta, a psychopharmacology researcher at King's College London, who was not involved in the study.