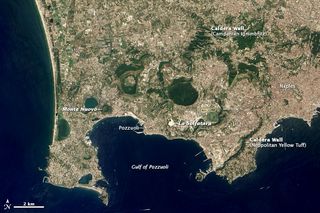 VANCOUVER, British Columbia — Neanderthals disappeared from Europe 40,000 years ago, about the same time as the region's biggest volcanic blast in the last 200,000 years. But don't blame the volcano, a new study suggests.

Most of the eruption's climate-cooling pollution spread east, away from Neanderthal territory, according to research presented Monday (Oct. 20) here at the Geological Society of America's annual meeting.

"The pattern where the cooling was most intense doesn't overlap with where most of the Neanderthal sites are located," said study author Benjamin Black, a postdoctoral scholar at the University of California, Berkeley.

The Neanderthals' demise is an ongoing mystery. Their steep population decline followed the arrival of modern humans in Europe, studies show. Did our ancestors play a role in the Neanderthal extinction? Was it the onset of a cold, dry climate? Or did Italy's Campi Flegrei volcano deliver the final blow?

Campi Flegrei is an active volcano west of Naples that erupted in a tremendous explosion between 39,000 and 40,000 years ago. Superheated pyroclastic flows of volcanic gas and ash raced up nearby ridges more than 3,200 feet (1,000 meters) high and crossed miles of open water in the Bay of Naples, scorching the Sorrento Peninsula. The ash layers left behind are known as the Campanian Ignimbrite. The volcano also shot sulfur dioxide into the stratosphere, the layer of the atmosphere above the one we live and breathe in. In the stratosphere, sulfur dioxide is transformed into particles that reflect sunlight and cool the planet. [The 10 Biggest Volcanic Eruptions in History]

Black created a computer model of Campi Flegrei's global environmental effects, and then compared the extent of cooling and acid rain with locations of known Neanderthal and human archaeological sites of the same age. (Sulfur dioxide gas can also lead to acid rain.) The results suggest the volcano's fallout was brief and limited in Western Europe, where most Neanderthals met their end by 40,000 years ago, according to the latest studies. "The unusual climatic conditions may have impacted daily life, but the effects did not last long enough to trigger a catastrophic collapse of the Neanderthal population," Black told Live Science.

In Eastern Europe, temperatures fell by about 5.4 degrees Fahrenheit (3 degrees Celsius). This amount of cooling is similar to Europe's so-called "year without a summer" in 1816, which followed Mount Tambora's 1815 eruption. On the Volcano Explosivity Index, a scale that ranks eruptions, both Campi Flegrei and Mount Tambora rank a 7 out of 8.

The most intense cooling, of up to 11 degrees F (6 degrees C), was centered over Asia and North America rather than Europe, according to Black's model. And even then, the worst of the chill lasted about a year. Within five years, sulfur levels and temperatures in the Northern Hemisphere were nearly back to normal.

Scientists aren't sure how much ash and volcanic gas spewed from Campi Flegrei, so Black modeled both high- and low-emission scenarios and checked the results against 40,000-year-old sulfate levels preserved in the Greenland Ice Sheet. The best match comes from the low-emission scenario, with an estimated 55.1 million tons (50 teragrams) of volcanic sulfur dioxide used in the model.

Some researchers have connected other bottlenecks in human evolution to powerful volcanic outbursts, such as the Toba supervolcano eruption 74,000 years ago. Yet recently, a separate study also found little evidence to support the link between Toba and a supposed die-off of humanity's African ancestors.

"Volcanoes can really impact climate in significant ways following an eruption, but it's challenging to attribute lingering effects to large, explosive, caldera-forming eruptions, even if they're really big," Black said.