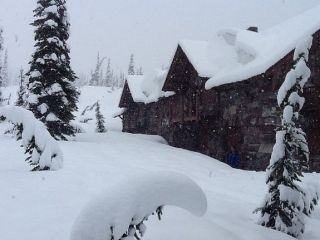 Even though ferocious snowstorms will become more frequent this century, their intensity will stay the same.
(Image: © Glacier National Park)

If you think the weather's acting strange, you're correct. Extreme weather in the United States is trending upward according to a range of sources, from the 2014 U.S. National Climate Assessment to the American Meteorological Society.

Human-caused climate change has already been blamed for much of it — most recently in connection with the California drought — but along with extreme weather , the United States is also getting extreme contrasts. What on Earth is going on when New York gets endless rain and San Francisco none, when one part of the country is freezing and another sees record heat?

Rising temperatures have something to do with it — and here's how.

In the northeast United States, the combination of more moisture in the atmosphere from a warmer world and changes in circulation patterns are contributing to more rain. In the southwest, meanwhile, rainfall is being suppressed by a northward expansion of a subtropical dry zone. The same atmospheric phenomena that cause this dry zone are also behind the the extreme drought now plaguing California — A persistent high pressure system (clear and calm conditions) off of the U.S. west coast is deflecting storms away from the region. A recent study led by Stanford scientists and published in a Bulletin of the American Meteorological Society special report shows that this system is much more likely to occur in the northern Pacific Ocean with human-caused climate change.

Heavy downpours are controlled by cloud mechanisms and moisture content, which are both changing as global temperatures rise. Clouds that can dump a lot of rain are more common in a warmer atmosphere. More evaporation has ledto more atmospheric moisture, which in turn can lead to more intense rainfall. That helps explain why the entire United States is experiencing more heavy downpours — even in the drought-stricken West.

Drought is largely dependent on the state of soil moisture, in which rain and evaporation ultimately determine how moist the soil will be. So although evaporation is increasing worldwidedue to warmer temperatures, the increase in precipitation in the northeastern U.S. yields a net increase in soil moisture in that part of the country, preventing the risk of drought. In the Southwest, a decrease in overall precipitation, along with increasing evaporation, brings drier conditions that spawn or magnify drought. As the soil there dries out, the incoming sunlight heats the ground, instead of evaporating water in the soil (which in turn would have cooled the land). This creates a vicious cycle of more heat and less rain — drought. [Another Dust Bowl? California Drought Resembles Worst in Millennium ]

4. Floods are also taking hold, in some regions

Although the potential for flooding depends on a number of factors, land-surface conditions do play a considerable role — generally speaking, the higher the soil moisture, the higher the chance that there will be more runoff from rainfall. Soil moisture is increasing in the Northeast United States (along with rainfall rates), and flooding events are on the rise. Fortunately for the region, many heavy rain storms occur in the summer and fallwhen soil moisture is low and the ground can absorb more water. Unfortunately, the sea level in the Northeast has risen by a foot since the 1900s, which contributes to more flooding. In complete contrast, average rainfall has decreased in the Southwest, and soil moisture trends indicate drying of the land. This is consistent with a large reduction in floods in the Southwest.

Intense storms, severe regional drought and heat waves, and extreme flooding led to more than $9 billion in disaster costs, in the United States alone, in 2013. It's uncertain what the total bill was if one factors-in ongoing agriculture, human health, and infrastructure losses from changing weather conditions.

Unless society curbs emissions of heat-trapping gases, scientists expect these trends to continue and worsen — and the contrast between wet and dry areas of the United States will likely become even sharper. Climate action needs to amp up if we are to finally set ourselves on a better path for the future.

Author's Note: You can learn more about climate change science from the EDF site "Climate change: Weather on steroids" and read more about many of the climatic changes discussed in this article in the 2014 U.S. National Climate Assessment. To take action, visit EDF's climate action site.

Follow all of the Expert Voices issues and debates — and become part of the discussion — on Facebook, Twitterand Google+. The views expressed are those of the author and do not necessarily reflect the views of the publisher. This version of the article was originally published on Live Science.