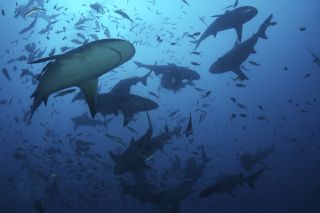 Sharks, like these bull sharks in Fiji, form a diverse group — along with rays and chimeras — of more than 1,000 cartilaginous fishes. Many are being overfished to the point of extinction.
(Image: © © Keith Ellenbogen)

Editor's Note: This Op-Ed has been edited to clarify the current state of the scientific debate regarding pain sensitivity in fish and to remove references to a paper in Fisheries by researchers at the University of Miami, as the paper's claims did not directly match the claims in the original Op-Ed text.

Ila France Porcher is a self-taught, published ethologist and the author of "The Shark Sessions." A wildlife artist who recorded the behavior of animals she painted, Porcher was intrigued by sharks in Tahiti and launched an intensive study to systematically observe them following the precepts of cognitive ethology. Credited with the discovery of a way to study sharks without killing them, Porcher has been called "the Jane Goodall of sharks" for her documentation of their intelligence in the wild. She contributed this article to Live Science's Expert Voices: Op-Ed & Insights.

Researchers at Yale Law School made headlines recently, when they suggested that people often fail to question their political beliefs in the face of scientific discoveries that contradict them. The study showed how people reason selectively, and interpret data in such a way that it conforms with their political vantage point.

Though rigorous scientific research has suggested that the pain system in fish is virtually identical to that of mammals, the fishing industry and others have maintained that fish are too simple-minded to feel pain. As a result, most people seem to believe the old fishermen's tale that no matter how you brutalize fish and sharks, they won't suffer, and the abuse continues with almost no public outcry or protest.

No evidence has ever been produced to support the idea that an animal could live successfully, and survive, without the ability to feel pain, an important warning sensation. It would result in inappropriate behavior, and the fish would go straight into evolution's garbage can. Only a small percentage of fish who come into the world live to adulthood, and any weakness would doom them. [Do Fish Feel Pain? The Debate Continues ]

Neither do observations of fish behavior support the idea. Fish appear cautious and careful, and display cognitive behavior in their efforts to eat food, such as sea urchins, that could sting them. Indeed, the evolution of urchin defenses, as well as a host of other oceanic stingers, seem to have depended on the ability of fish to feel pain.

And yet, the subjective idea of fish feeling no pain has persisted.

The study of pain in fish

Since animals cannot tell us how they feel, scientists have searched indirectly for evidence about their subjective experiences, in the studies of neuroanatomy, neurophysiology and behavior. Researchers have developed strict criteria, all of which need to be met, before they can conclude that an animal can feel pain .

There must be opioid receptors within the nervous system, and opioid substances produced internally. Painkilling drugs should relieve the symptoms of pain that the animal displays, and the animal should be able to learn to avoid a painful stimulus. This should be so important to the animal that it avoids the threat of pain right away. The painful event should strongly interfere with normal behavior — it should not be an instantaneous withdrawal response, but long-term distress.

Fish meet all of those criteria, as has been shown in a wide variety of experiments. Their nociceptors are nearly identical to those found in mammals and humans, and the nociceptors are connected to the brain through neurons. There are also connections between the different structures of the brain, including those that are considered crucial to the experience of pain. The whole brain of the fish is active during painful events.

In addition to neural activity, certain genes that are crucial to the experience of pain in humans are also found in fish, and they are active throughout the fish's brain during painful events. This activity of the brain, at both the molecular and the physiological level, indicates that these are not reflex reactions. If they were, such activity would not be seen in the higher brain.

How fish react to pain

Fish have displayed a variety of adverse changes in their behavior after the infliction of pain, such as an extreme increase in their ventilation (respiratory) rate, rubbing damaged body parts on the surrounding environment, rocking on their pectoral fins, trying to stay upright and no longer feeding. These, and other symptoms of distress, are relieved by the administration of morphine, which completes the circle and identifies pain as the cause of the change in behavior.

Like other animals tested in laboratory settings, fish have been shown to self-administer painkillers if they can — even if that means going into a location that they do not like — to bathe in water that medicates them. This is another clue that the fish were suffering, and found relief in the undesirable location.

Fish swiftly learn to avoid painful events, which researchers think indicates that they are conscious — they experience the pain so severely that they are strongly motivated to avoid feeling it again, even after just one exposure.

Though humans can override pain, at times, in certain heightened mental states — particularly when in danger — it seems that fish cannot do so. Studies have shown that after being hurt, fish become far less alert to danger, as if their pain is too overwhelming for them to ignore it, even to escape a predator. It is thought that due to their simpler neural design and mental states, fish lack the ability to think about their pain and put it in perspective as humans can. Pain for fish seems always to be an intense experience, which suggests that they may actually feel pain more intensely than humans.

When Rebecca Dunlop of Queensland University discovered that fish learn to avoid painful experiences, she wrote, "Pain avoidance in fish doesn't seem to be a reflex response, but rather one that is learned, remembered and is changed according to different circumstances. Therefore, if fish can perceive pain, then angling [fishing] cannot continue to be considered a noncruel sport."

Because of such findings, there has been meticulous research into the best way to relieve pain in fish during surgery. Because the pain system in fish appears to be the same as that in birds and mammals, veterinarians systematically use pain relief while performing surgery on fish. Given that they are conscious, and may suffer on an emotional level, fish welfare emerges as an important issue.

Yet while amphibians, reptiles, birds and mammals have been protected from cruel treatment, fish and sharks have not, thanks to the domination of those who profit from killing them.

When fishing slaughter began among the sharks I had been studying in Tahiti, the entire community fled, and it never reformed. Those who had escaped being landed first appeared swimming unsteadily, and more weakly than sharks I had earlier observed near death from natural causes. Those sharks displayed the same symptoms of pain I had seen in birds and mammals as a wildlife rehabilitator. They were less alert, less responsive, and they swam slowly, erratically, and often as if they were off-balance. The recovery of their normal swimming pattern, when the sharks lived, took up to two weeks.

Large hooks remained stabbed into those sharks' mouths, and often into the jaw itself, where they interfered with the sharks' ability to eat. Some lost weight and died in the next months. The hooks took weeks, and in some cases months, to rust out. Sharks appeared during this time trailing lengths of fishing line that had become covered with algae to a thickness of several centimeters. Some continually jerked their heads away from the drag as if the heavy weight pulling on the hook in them was a steady source of discomfort. Juveniles appeared exhausted by it and disappeared before losing the hooks.

Sharks are not trout. They are large animals that have to swim continuously forward just to keep an adequate supply of oxygen moving over their gills, and their strong horizontal undulations are like a heartbeat, a powerful automatic motion they cannot stop. Their desperate efforts to escape death while pulling with so much force against a big shark hook piercing their faces or internal organs can cause serious internal and facial injuries. And as any wildlife rehabilitator soon learns through experience, serious injuries to wild animals are usually fatal without the benefit of treatment and supportive care.

One of the most famous American shark-fishing charter boat captains, Frank Mundus, was quoted by Russell Drumm in his book "In the Slick of the Cricket" as saying:

"Feeling good about tagging and releasing sharks was folly. The cheaper hooks bought by the weekend warriors were more often than not swallowed by the sharks which then fought their final battle gut-hooked. After being released, most sank to the bottom, dead. Maybe two out of twelve are hooked in the mouth. Add it up along the coast."

A cultural bent against sharks

If you try to profit from cock fighting or dog fighting in the state of Florida, you are guilty of a felony, and now that it has been established that fish suffer as much as dogs and birds, there is no difference in terms of animal suffering among these blood sports.

But with research tagging being the favored means of gaining data on living sharks, their true natural behavior remains obscure to many researchers. Their very approach to sharks through fishing and fisheries denies an appreciation of the real animals pursuing complex lives in their natural environment.

There is a deep cultural bias against sharks, influenced by the fishing industry and the media, and yet it is not often recognized. In the case of spiders and snakes, everyone knows that they are disfavored — but not in the case of sharks. Most people, including those who should know better, seem to believe that the way sharks are portrayed by fisheries and in the media is the way they truly are.

It is important that people begin to appreciate the true qualities of these unusual and important animals, in order to denounce this cultural situation, and insist that they be treated humanely in the interests of continuing to build a moral society.

Porcher's most recent Op-Ed was "Patience, Persistence Reveal Sharks' True Nature." Follow all of the Expert Voices issues and debates — and become part of the discussion — on Facebook, Twitter and Google+. The views expressed are those of the author and do not necessarily reflect the views of the publisher. This version of the article was originally published on Live Science.