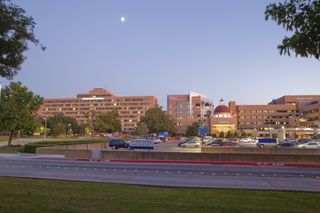 Health officials are making enhancements to improve safety at U.S. hospitals that treat Ebola patients after a nurse became infected with the virus while treating a patient with the disease.

Among the steps being taken is to enhance the training of health care workers at the hospital in Dallas where the infection occurred, Dr. Tom Frieden, director of the Centers for Disease Control and Prevention, said in a news conference today. Two nurses from Emory University, the facility that treated two other American patients with Ebola, will be assisting in the training, Frieden said.

Health officials will also appoint a site manager to oversee all aspects of infection control at the Dallas hospital, including ensuring that workers put on and take off protective equipment correctly, Frieden said.

The nurse, Nina Pham of Texas Health Presbyterian Hospital, became infected with Ebola after treating Thomas Eric Duncan, the first person to be diagnosed with Ebola in the United States.

Health officials are now also actively monitoring 76 health care workers who may have been exposed to Duncan while he was being treated at the hospital, said Dr. David Lakey, commissioner of the Texas Department of State Health Services. So far, no other workers besides Pham are showing symptoms of Ebola, Lakey said.

Health officials do not know how Pham became infected — she was wearing protective gear when she cared for Duncan. [Protective Gear For Ebola Patient Care (Infographic)]

Pham is the first person to contract Ebola in the United States (Duncan became infected in Liberia, before leaving that county). Pham came down with a fever last Friday, and tested positive for Ebola on Sunday, officials said. Only one person had contact with Pham while she may have been contagious, and this person so far shows no symptoms of Ebola, Lakey said.

Health officials are also monitoring 48 other people who had contact wtih Duncan before he was isolated. None of these people have symptoms of Ebola, and it is increasingly unlikely that any of them will develop the disease, Frieden said.

"While it wouldn't be impossible that some of them would develop the disease, they've now passed through the highest risk period," which is eight to 10 days after exposure, Frieden said. It has been more than 14 days since the original 48 contacts were exposed to Duncan, but it can take up to 21 days before people exposed to Ebola show symptoms of the disease.

The CDC is also ramping up eduction about Ebola for health care workers across the country, through webinars, conference calls and other means, Frieden said. In addition, the CDC has established an Ebola response team that could be on the ground within hours of a new Ebola case at a U.S. hospital, he said.

Ebola is spread through direct contact with the bodily fluids, such as blood or secretions, of an infected individual, or by contact with contaminated objects, such as needles and syringes, according to the CDC. People with Ebola are only contagious after they start showing symptoms.

As of Oct. 8, at least 8,400 people have become ill and more than 4,000 have died of Ebola in the ongoing Ebola outbreak in Guinea, Liberia and Sierra Leone, according to the CDC.