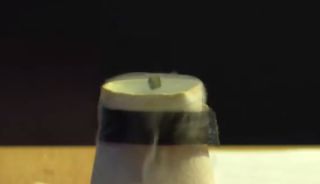 The magnetic cube hovers in the air as liquid nitrogen flows around the superconductor beneath the cube.
(Image: © Perimeter Institute/YouTube)

A tiny cube floating and flipping in midair sounds like something straight out of "Harry Potter," but Harvard physicist Subir Sachdev doesn't need magic to levitate objects.

Sachdev performed a levitation demonstration using a magnet and a superconductor during a presentation at the Perimeter Institute on Oct. 1. Superconductors are incredible materials that can conduct electricity with zero resistance. But to generate the superconductivity, the material has to be extremely cold, and so Sachdev poured liquid nitrogen that's about minus 320 degrees Fahrenheit (minus 195 degrees Celsius) on the superconductor to trigger its superconductive state.

"The hope is that these materials will actually be useful for something," Sachdev said.

High-temperature superconductors could have a wide variety of applications, including in MRI machines, motors, generators, fusion reactors and low-loss power cables.

Physicists are still not entirely sure what gives a superconductor its magiclike properties and why superconductivity doesn't work above a certain temperature, but Sachdev said he thinks he's pretty close to the answer.

"That's one of the key mysterious properties of quantum mechanics," Sachdev said.

Quantum entanglement is superposition on a larger scale, something that Sachdev described during his talk. Particles become entangled when they interact with each other. Entanglement means that when an action is performed on one particle, it directly affects that particle's entangled partner no matter how far apart they are. [How Quantum Entanglement Works (Infographic)]

Sachdev said a good way to think about this is to imagine how two entangled electrons rotate. Electrons either rotate clockwise (an "up" spin) or counterclockwise (a "down" spin).

"Is the left electron up or down?" Sachdev asked the audience. "The answer is really both." And this is true for both electrons.

The electrons will stay in this superposition state until someone measures one of the two particles. If one electron has an up spin upon being measured, its entangled partner instantaneously acquires a down spin. This is true no matter how far apart the electrons are, even if one electron stayed on Earth and the other was beamed to the moon.

Sachdev said he thinks a special kind of this quantum entanglement is responsible for the magiclike properties of superconductors.

A crystalline compound called YBCO (yttrium barium copper oxide) is the first material that scientists discovered that can act as superconductor at temperatures above the boiling point of liquid nitrogen (minus 320 degrees Fahrenheit). Sachdev said the copper atoms in this substance are the most important part of the compound. The electrons around the copper atoms pair off, and "every pair of electrons is everywhere [in the material] at the same time," Sachdev said while showing a diagram of the paired electrons. This clump of entangled particles in superposition leads to superconductivity.

The quantum entanglement in a superconductor is a little more complex, Sachdev said. It appears the electron pairs swap partners, creating what he calls "long-range entanglement."

"Just think about replacing all the power cables under New York," Sachdev said.