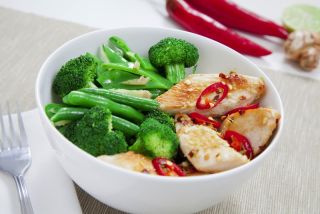 Doesn't it seem like a new fad diet pops up every day? One may think that we would eventually run out of food combinations, but new trends just keep emerging. Many of them are variations on the same core principles — and any way you cut it, low-carb and low-fat diets are still all the rage. But do they work?

A small study published this month in the journal Annals of Internal Medicine found that obese adults assigned to a low-carbohydrate diet lost more weight over a year than those on a low-fat plan. It is important to note, though, that this study excluded exercise. In fact, the study's participants were not permitted to exercise during the one-year period, so a true comparison could be made between the two diets alone. But carbohydrates act as fuel for the body, so adding exercise to the mix may have drastically changed the outcome.

Before you jump on the low-carb bandwagon, you should know that following a low-carb diet may impact your sleep patterns. People on a very low carbohydrate diet may spend less time in deep, REM sleep compared with those who eat more carbs, according to a 2008 study in the journal Nutritional Neuroscience. The study only followed participants for 48 hours, so the longer-term effects remain unclear, but the findings do suggest that sleep is affected in the short term by eating a low-carb diet.

This study serves as a reminder that weight loss does not necessarily equate to optimal health. And even the term "low-carb" can refer to a myriad of diets from an Atkins-style bacon fest to a more balanced diet that includes a variety of vegetables. [7 Biggest Diet Myths]

If you want to take advantage of the weight-loss benefits of a low-carb diet, but still consume a balanced diet, here are three tips to consider:

1. Be wary of exclusions. There's no danger in excluding things like MSG or hydrogenated fats from your diet, but if a diet recommends completely excluding a certain food group, proceed with caution.

2. Remember that all carbohydrates aren't the enemy. When you hear someone say that carbs make them fat, they are probably talking about things like white flour and sugar. Vegetables also contain certain forms of carbohydrates, and they contain a great deal of vitamins and minerals that the body needs.

3. Evaluate your progress frequently. Are you hungry all the time? Grouchy or sleep deprived? When you start eating healthier, you should also start feeling better. If you aren't, the diet that you are following may not be the best fit for you. Don't fall into the trap of getting stuck on a diet just because you're losing weight. You should also be feeling well.

Healthy Bites appears weekly on Live Science. Deborah Herlax Enos is a certified nutritionist and a coach and weight loss expert in the Seattle area with more than 20 years of experience. Follow her on Twitter @1minwellness, and read more tips on her blog, Health in a Hurry!