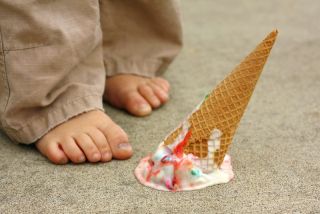 That feeling of "oh, bummer," is linked with a rather uncommon type of brain signaling, new research shows. The finding could lead to a new class of drugs to treat depression, researchers say.

That downer feeling involves the finely tuned, simultaneous firing of two different neurotransmitters in the brain. It is the ratio of the two neurotransmitters — one enhancing and one dampening positive feelings — that determines where on the disappointment spectrum you'll fall, from "oh well" to "total bummer."

The scientists call this dual firing of neurotransmitters, which sets off the human sense of disappointment, a "dimmer switch" — essentially the neurochemical underpinnings for calling the proverbial glass of water half empty or half full.

The study was published Sept. 18 in the journal Science.

In the new study, a team of scientists led by Dr. Roberto Malinow, a professor of neurobiology at the University of California, San Diego School of Medicine,found that two well-known neurotransmitters — glutamate and GABA, which is short for gamma-aminobutyric acid — are released simultaneously by neurons in a small region of the brain called the lateral habenula to signal the emotion of disappointment.

In the new work, the researchers studied rodents. They demonstrated that the neurons of rodents with aspects of human depression produced less GABA relative to glutamate, compared with rodents without depression. Also, when the animals with depression were given an antidepressant to raise their brains' serotonin levels, their relative GABA levels increased — a sign that they were less disappointed after being denied their reward.

"Our study suggests that one of the ways in which serotonin alleviates depression is by rebalancing the brain's processing of negative life events through the balance of glutamate and GABA in the habenula," Shabel said. "We may now have a precise neurochemical explanation for why antidepressants make some people more resilient to negative experiences."

That means antidepressants are likely to work on this glutamate-GABA ratio, but in ways that are hard to control from person to person, he said. The researchers said that if they could develop medications that target the lateral habenula more selectively, then they might have a better treatment for depression.

Several current antidepressant drugs target serotonin, but the neurotransmitter is used by the brain and central nervous system for many kinds of tasks other than mood, such as for controlling sleep, memory and appetite, so the drugs don't act selectively on depression. Glutamate and GABA also are used for a variety of brain tasks, and thus are not good targets for drugs, Shabel said.

But focusing on how to manipulate this newly discovered mechanism of competing neurotransmitters might be a promising avenue that leads to the discovery of a new generation of antidepressants, the researchers said.