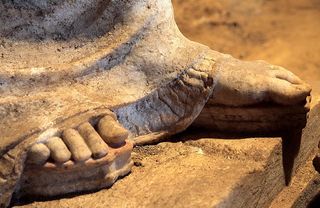 The sandal-clad feet of a caryatid inside the tomb at Amphipolis.
(Image: © Greek Ministry of Culture)

Let these ancient statues be an inspiration to tall girls who want to wear heels: A pair of caryatids revealed in a tomb in Greece stand more than 7 feet tall, and they have a little extra height from their platform sandals.

Archaeologists recently uncovered the feet of the wavy-haired female statues standing guard at the entrance of a huge burial complex in Amphipolis. The stone statues' delicately carved toes have survived for more than 2,300 years, and their thick-soled shoes, known as kothornoi, have even retained traces of red and yellow paint, new photos show.

Called caryatids, the ancient sculptures were discovered earlier this month at the Kasta Hill site in Amphipolis, about 65 miles (104 kilometers) east of Thessaloniki in the Central Macedonia region of Greece. The massive tomb is thought to date back to the era of Alexander the Great, in the fourth century B.C. [See Photos of the Alexander-Era Tomb's Excavation]

With the feet revealed, excavators could finally measure the full height of the larger-than-life caryatids: 7.45 feet, or 2.27 meters, according to the latest update on the excavation from the Greek Ministry of Culture.

While removing soil from around the statues, archaeologists also discovered parts of the caryatids' broken hands and arms.

Caryatids are statues that take the place of columns or pillars in Greek architecture. Perhaps the most famous examples are the six caryatids supporting the porch of the Erechtheion, an ancient temple at the Acropolis in Athens.

The caryatids at Amphipolis flank the second doorway inside the tomb, and their bodies had been partially covered up by a wall of stones. When excavators revealed the statues' torsos, they found that the right arm of the western caryatid and the left arm of the eastern one were both outstretched, "as if to symbolically prevent anyone attempting to enter the grave," a statement from the Greek Ministry of Culture said.

Archaeologists still aren't sure who's buried inside. The head of the Greek Ministry of Culture, Kostas Tasoulas, told Mega TV Monday (Sept. 22) it is "impossible" for the grave of Alexander the Great to be at Amphipolis, according to the Greek Reporter. Historical texts indicate Alexander's body was ultimately laid to rest in Alexandria.

But if the tomb at Amphipolis proves to be intact, the excavators might find someone from Alexander's inner circle. The archaeologists have said they believe the monumental tomb bears the design fingerprints of Dinocrates, Alexander's chief architect. The burial complex is surrounded by a wall measuring some 1,600 feet (490 meters) in perimeter; two headless sphinxes sit on top of the first doorway.