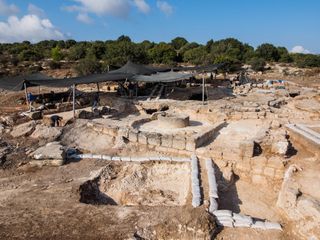 The excavation site of an ancient compound in Israel that has an oil press, winepress and mosaics dating back to the Byzantine period.
(Image: © Griffin Aerial Photography Company, courtesy of the Israel Antiquities Authority)

An ancient compound decorated with earth-toned mosaics may have once housed Byzantine-era monks as they pressed wine and oil for their livelihood. Archaeologists from the Israeli Antiquities Authority reported that they had uncovered the ancient compound in recent weeks.

The archaeological team found the compound in Ramat Bet Shemesh, about 19 miles (30 kilometers) west of Jerusalem. Surprisingly, the team's initial search didn't require any digging: While surveying the hills south of Bet Shemesh, the researchers discovered cisterns, a cave opening and the tops of several walls in plain sight. These clues led to a large archaeological excavation that revealed the affluent lives of people who lived at the site before the seventh century C.E. during the Byzantine period, which lasted from 330 to 1453.

The excavation unearthed a sizeable, yet organized compound with a sturdy outer wall. Its inhabitants had divided the indoor area into two regions: an industrial room and a living space. The team also found a large, well-persevered press that would have been used to make oil in the industrial room. [Image Gallery: See Arial Shots of the Byzantine Dwelling]

The compound also held a large winepress with two treading floors — an area where workers crush grapes with their feet to extract the juice — that connected to a collection vat.

These two findings, the oil press and the winepress, suggest the local residents likely produced wine and oil for a living, the researchers said in a statement. What's more, the remarkable size of the equipment suggests the residents had an industrial-scale operation rather than one for domestic use.

The residential space was divided into several rooms, some with mosaics preserved on the floor. In one room with a colorful mosaic floor, the researchers found a staircase that led to a second story of the house, which was not preserved. A mosaic in another room shows a cluster of grapes surrounded by flowers within a circle and other geometric shapes.

The team also found two ovens, likely used for baking, within the compound.

The archaeologists did not find any religious artifacts, but it's possible the compound served as a monastery during the Byzantine period, said Irene Zilberbod and Tehila libman, excavation directors on behalf of the Israel Antiquities Authority.

"It is true we did not find a church at the site or an inscription or any other unequivocal evidence of religious worship," they said in the statement. "Nevertheless, the impressive construction; the dating to the Byzantine period; the magnificent mosaic floors, window and roof tile artifacts; as well as the agricultural-industrial installations inside the dwelling compound are all known to us from numerous other contemporary monasteries."

The findings suggest the compound may have been a monastery that served as a dwelling, a workspace and a religious area used by monks, the archaeologists said.

The building likely changed hands at the beginning of the Islamic period in the seventhcentury, when its operations stopped and new residents occupied the space, the researchers said. The new owners changed the plan of the compound to fit their needs, the archaeologists found.

The Israeli government is now moving to preserve the site for future generations.

"After exposing the compound and recognizing its importance, the Israel Antiquities Authority and Ministry of Construction and Housing undertook the measures necessary for preserving and developing the site as an archaeological landmark in the heart of the new neighborhood slated to be built there," said Yuval Baruch, the Jerusalem regional archaeologist of the Israel Antiquities Authority.

The finding is the latest of many archaeological sites that provide insight into the past religious and material lives of the region's prosperous ancient inhabitants. In 2013, a team unearthed a 10,000-year-old cultic temple west of Jerusalem; that same year, the team found the remains of a wealthy estate with a garden and a mosaic fountainin central Israel dating to the late 10th and early 11th centuries.