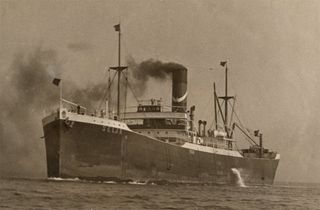 This huge ship now rests on the bottom of the Gulf of the Farallones, just west of San Francisco. Named Selja, it sank in 1910 after a collision with another ship.
(Image: © San Francisco Maritime National Historical Park)

The waters just west of San Francisco's Golden Gate Bridge hide a graveyard of sunken ships. By some estimates, there are 300 wrecks in the Gulf of the Farallones National Marine Sanctuary and the Golden Gate National Recreation Area alone. But only a fraction of them have been seen by scientists.

Marine archaeologists and researchers with the National Oceanic and Atmospheric Administration (NOAA) have set out to document those lost vessels. Over the course of a five-day survey that just ended yesterday (Sept. 15), the team discovered the sites of at least four wrecks: the 1910 SS Selja shipwreck, the 1863 wreck of the clipper ship Noonday and two unidentified wrecks.

"We're looking at an area that was a funnel to the busiest and most important American port on the Pacific Coast," said James Delgado, director of Maritime Heritage for the Office of National Marine Sanctuaries. The wrecks in the Gulf of the Farallones span a huge chunk of history, from 1595 to the present. Perhaps the best-known recent example is the tanker Puerto Rican, which exploded and sank off San Francisco in 1984. [See Photos of the Sunken Ships Near San Francisco]

Delgado told Live Science that the team used a remotely operated vehicle, or ROV, to assess eight spots that had intriguing sonar signals. Four of of those sites turned out to have shipwrecks.

One of the newly located wrecks, the SS Selja steam freighter, was a workhorse that carried goods between the Pacific Northwest and China and Japan. On Nov. 22, 1910, the 380-foot-long (116 meters) vessel sank after it collided with a steamer named Beaver off Point Reyes, California. The Master of Selja, Olaf Lie, tried suing the Beaver and its owners for the loss of the ship, but the maritime court ruled against Lie, claiming he had been going too fast in a thick fog and was responsible, according to NOAA.

A volunteer who reanalyzed a cache of NOAA sonar data found a signal that was the right size and in the right location to be the clipper ship Noonday. The vessel had brought men and supplies to California during and after the Gold Rush. On New Year's Day in 1863, after a 139-day journey from Boston, the Noonday struck a rock just as it was approaching its destination, the San Francisco harbor. It quickly took on water and sank. Today, the vessel is obscured by mud.

The team also discovered one badly broken-up wreck covered in fishnets and a rather intact tugboat where no wreck was expected to be found, Delgado said. "We have a little homework to do there," he added.

NOAA additionally completed the first sonar survey of the wrecks of the tankers Frank H. Buck and Lyman Stewart, which were both loaded with oil when they ran aground in 1937 and 1922, respectively, after collisions with other vessels in thick fog. The engines from both shipwrecks are visible today when the tide goes out off San Francisco's Lands End park.

NOAA has created an online inventory of underwater footage, sonar images, historic photographs and documents related to the wrecks that have been located.

Editor's note: This story was updated at 6:17 p.m. ET to add new information and quotes from James Delgado.