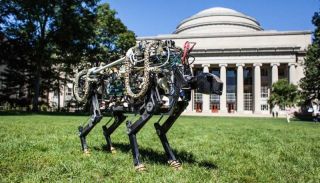 The robot cheetah can navigate uneven terrain and can jump over a foot in the air to avoid obstacles.
(Image: © Jose-Luis Olivares/MIT)

Robots are likely not the first thing you think of when you hear the word "speed," but one group of researchers is trying to quell the stereotype of a lumbering robot with a machine built to move more like one of nature's quickest creatures — the cheetah.

Clocking in at a maximum speed of 10 miles per hour (16 km/h), the robotic cheetah isn't quite ready to compete with its wild cousins, who can accelerate to 60 mph (96 km/h) in just a few seconds. But this four-legged robot could eventually reach speeds of 30 mph (48 km/h), according to researchers at the Massachusetts Institute of Technology (MIT).

Like a real cheetah, the robot is designed to build up to a full sprint quickly by moving its legs in tandem (i.e., its back legs move together, as do its front legs) — a pattern of movement known as bounding. [See video of the cheetah robot in action]

To get the four-legged machine to run like its big-cat inspiration, researchers created an algorithm that controls the amount of force exerted by each of the robot's legs as it hits the ground. Having a high degree of control over force is important because it allows the researchers to manage the robot's speed, said Sangbae Kim, an associate professor of mechanical engineering at MIT, who helped develop the cheetah bot.

"Many sprinters, like Usain Bolt, don't cycle their legs really fast. They actually increase their stride by pushing downward harder and increasing their ground force," Kim said in a statement.

By adopting this force-based approach to building speed, the researchers were able to build a bot that can handle rough terrain, Kim said. In the same way that a cheetah can bound over a rock that sticks out of the savannah, the robot cheetah can jump over obstacles in its path. In treadmill experiments, the researchers found that the bot could jump over foam obstacles that are more than a foot (30 centimeters) tall.

But perhaps the coolest (and most catlike) thing about this bot is its stealth abilities. Propelled forward by battery-powered electric motors, the new cheetah bot is quiet compared to other four-legged robots, most of which are powered by gasoline engines, according to Kim.

"Our robot can be [as] silent and as efficient as animals," Kim said. "The only things you hear are the feet hitting the ground. This is kind of a new paradigm where we're controlling force in a highly dynamic situation. Any legged robot should be able to do this in the future."

The U.S. military has been trying for several years to develop a robot that is as quiet as it is quick. In 2012, the Defense Advanced Research Projects Agency (DARPA), the branch of the military tasked with developing new technologies, introduced its Maximum Mobility and Manipulation (M3) program, which aims to develop robots that behave more like animals and humans.

One of the most successful designs to come out of the M3 program so far is a robot known simply as Cheetah. Designed by engineers at Boston Dynamics, this machine is allegedly the fastest robot in the world, clocking in at 28.3 mph (45.5 km/h) in treadmill tests. However, an off-board hydraulic pump powers the bot, which makes the machine very loud and not very mobile.

Boston Dynamics is still working on a quadruped bot, the WildCat, that's less noisy and that can be used outside of the lab. MIT's cheetah robot, also funded by DARPA, may offer some insight into how to build a stealthier bot.