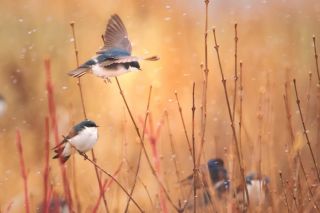 Ushuaia and Fairbanks are cities near the tips of the world.

The capital of Argentina's Tierra del Fuego province and the Alaskan metropolis don't share much in common. Except for a cluster of simple wood boxes on poles and the scientists and swallows who flock to them.

Both animals are part of Golondrinas de las Américas — the Swallows of the Americas, an international research project studying the slight, swift swallow to answer larger questions about biological patterns.

"Looking at these birds across this huge hemispheric span of habitats provides a broader opportunity to explore relationships between the environment, temperatures and breeding," says David Winkler, a professor in Cornell University's Department of Ecology and Evolutionary Biology. He is the lead investigator for Golondrinas, funded through the National Science Foundation's Partnerships in International Research and Education (PIRE) program.

PIRE brings together U.S. and foreign researchers across all fields of science and engineering, supporting research advances that depend upon international collaboration.

This type of international collaboration is especially crucial for the Golondrinas project. The team is studying causes of variation in the life histories of one genus of swallows, Tachycineta, which live throughout the Americas. "We wanted to dig in with a really full-blown exploration of all aspects of their breeding biology and ecology," Winkler says.

And for the last seven years, that's exactly what they've done. The site map for the project, affectionately known as Golo, spans the entire western swath of Earth: The Pacific stretch of California and Mexico, a sprinkling in Canada, the Midwest and the North Atlantic coast, then down through Central America and the Caribbean before spreading into Venezuela, Ecuador, Brazil, Peru, Chile and Argentina.

The Golo project has involved hundreds of students and interns — traveling in the U.S. and abroad – plus workshops, endless logistics, and collaborations with local residents and organizations. It's inspired graduate careers and supported conservation projects, and woven together an international swallow community.

"We were very ambitious," says Winkler.

There are nine species of swallows in the& Tachycineta genus. All are sleek white-breasted birds with a metallic-sheened back, like they're dressed for an evening at the theatre.

Swallows are cavity dwellers, depending on other species to make homes for them. Woodpecker holes are a good choice for swallows, but so are the 5-by-5 inch nest boxes Golo makes available to them. Swallows will readily nest in these rough wood homes, especially if other natural cavities are limited. Which means you can pretty easily create your own swallow population — one reason they make such good study subjects, Winkler says.

The other reason is that swallows are, for the most part, pretty resilient birds. "Once they find a cavity and start nesting, they're staying there," Winkler says. "I call them ever-ready bunnies … as long as the food holds up and the weather doesn't get too bad, they keep trying."

At the various Golo sites, the researchers catch and measure individual swallows, monitor all aspects of the breeding season — from nest-building to chick counts — and take insect samples, to keep tabs on the swallow's prey. Protocols are detailed in the Golondrinas handbook — "the Bible of how we do things," says Winkler — and results are loaded onto a shared database. [Citizen Science Programs That Are 'For the Birds' ]

All this data will help answer some big questions: How does weather affect bird breeding at different latitudes? How do the birds vary physiologically across different regions? How much do tropical and temperate ecosystems — and changes in them — affect the reproduction, and ultimately the survival, of these birds?

"These interactions created a sustainable and synergistic research collaboration that has helped us better understand climactic influences on these birds and their insect prey."

Golo members recently published a paper in the journal Ecography — using 16,000 nest records from seven species — showing a connection between clutch size (how many eggs a swallow lays) and lay date (when she lays them) dependent on geography (variations in latitude).

"We're still analyzing a lot of data and I bet we will be for a while," Winkler says.

One of the strongest outcomes of Golo, however, might not be the swallow populations sparked by the project, but the human ones.

Maya Wilson started as a Golo intern the day after she graduated from Franklin and Marshall College, one of the project's partner institutions. She did field work in Alberta, Canada, then on to Argentina and upstate New York.

She credits her undergraduate advisor — Daniel Ardia, an associate professor of biology at Franklin and Marshall and a co-principal investigator on the PIRE — for introducing her to Golo. What made her stay in the program were the swallows. "I just love working with these birds. There's nothing like holding a wild bird in your hand, and really appreciating what they're doing to survive and reproduce."

This month, Wilson starts a PhD program at Virginia Tech, where she will focus her research on the little-known, endangered Bahama Swallow. Wilson wants to study the bird's population and breeding habitat, get a sense of what's threatening them, and work with the local government and community to protect the bird — a research track forged by her time with Golo.

"I think that was the goal … to teach people about science and to develop students into capable biologists," says Justin Proctor, another former Golo intern who is now a graduate student at Cornell.

Proctor's Tachycineta specialty is the Golden Swallow, a bird endemic to the Dominican Republic and inching closer to "endangered” status. He's spent three years trying to not only unravel the mystery of why Golden Swallow populations are declining, but build sustainable scientific capacity around the bird.

"We've reached out to almost everybody in the country," Proctor says, from local residents hired to build nest boxes to established conservation nonprofits like BirdsCaribbean. Students from nearby South American countries have helped his research and honed their own scientific skills in the process. And after every field season, Proctor translates the season's research report into Spanish and distributes a it to members of the local communities involved in the project. "It's important that we make sure the information ends up back where it is needed most," he says.

The effort has paid off. "Even rural farmers with no formal education in the sciences, they're walking through the fields pointing out swallows. It's had a pretty solid impact."

And one the Golo team intends to carry on, despite the recent end of PIRE funding (the Golondrinas project was supported through August 2014). The Golden Swallow slice of Golo is now funded and led mainly by Dominicans, according to Proctor. Many of the other sites are in good shape for continued research and monitoring, Winkler says. And the swallows certainly won't be moving out of their nest boxes any time soon.

"As long as people are pointing up in the sky and talking about the birds," Proctor says. "Whether they know what bird it is or not – that's what's important."