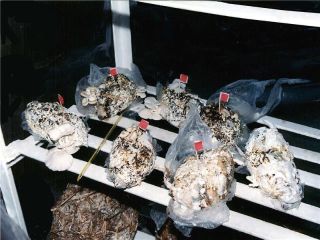 To degrade disposable diapers, scientists found a way to grow mushrooms on them.
(Image: © Image courtesy of Investigación y Desarrollo)

Disposable diapers are made of some of the most indestructible materials on Earth, but a group of researchers has found a way to degrade the soiled garments: by growing mushrooms on them.

The scientists grew the oyster mushroom Pleurotus ostreatus on a substance made from used diapers, and were able to reduce the diaper's weight and volume by up to 80 percent, according to a news statement.

Disposable diapers last for hundreds of years in landfills, and the average baby goes through 8,000 diapers during its infancy, according to the U.S. Environmental Protection Agency. [6 (Or So) Ways Fungi Can Help Humanity]

Diapers contain the plant-based material cellulose, which mushrooms consume, but they also contain nonbiodegradable materials such as polyethylene, polypropylene and a superabsorbent gel known as sodium polyacrylate.

To grow the fungus, the researchers only used diapers that contained liquid waste. They sterilized the garments in an autoclave, a device that subjects them to high-pressure steam. The scientists then ground up the diaper remains and mixed them with lignin from the remains of pressed grapes, coffee or pineapple tops. (Lignin is a woody substance the mushrooms need in order to grow.)

The researchers also used commercially available fungus spores grown on wheat or sorghum, which they spread on the diaper mixture. The icky substance was kept in a plastic bag for three weeks in the dark, under controlled temperature and humidity, and was then exposed to light.

Although the main purpose of growing the mushrooms was to degrade the diapers, the researchers decided to taste their crop.

They knew the diapers did not contain any contaminants or parasites, since the diapers were sterilized. They also determined that these mushrooms had similar amounts of protein, fat, vitamins and minerals as commercial yeast.

However, the mushrooms were grown on a small scale, and were not intended to be sold for human consumption, the researchers said. Nevertheless, they could be used as a supplement for cattle feed.

The synthetic materials in the diapers could aid the mushrooms' growth, possibly by providing air pockets and giving the fungi room to develop, the researchers said. The plastic materials could later be recycled, and the remnants of the superabsorbent gel from the diapers could be added to soils that don't retain moisture well, to reduce the amount of irrigation needed, the researchers added.