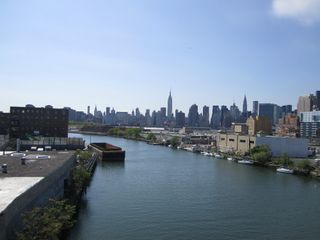 Newtown Creek, which opens into New York City's East River, accumulated toxic waste during its time as an industrial hub. An underground oil spill nearby seeps into the water, and when heavy rains flood New York City's sewer system, raw sewage pours into the water. The EPA listed it as a Superfund site in 2010.
(Image: © Wynne Parry)

NEW YORK  – Between the New York City boroughs of Brooklyn and Queens is a broad creek tainted by 150 years of pollution. It has received toxins from the petrochemical plants, fertilizer factories and other industries that once flourished along its banks. Oil seeps into it from a 50-acre underground spill nearby. And when heavy rains flood the city's sewer system, raw sewage pours into the water.

The Environmental Protection Agency designated the creek a Superfund site in 2010, triggering a lengthy evaluation and cleanup process.

In the meantime, however, a local group has begun experimenting with an innovative technique to break down contaminants in the water. The key: a fungus more widely known to taste good in stir fry.

On a Sunday afternoon in early May, Jan Mun, the artist in residence with the Newtown Creek Alliance, presented to community members a circular floating platform of straw-filled burlap intended to house the fine, interwoven filaments of oyster mushroom fungi. [Gallery: Floating Fungus Enters Polluted Creek]

"We are still at the testing stage, but the idea is that if we can keep them [fungal filaments] alive, they can actually clean the water at the molecular level," Mun said as the concentric rings of soggy burlap, designed to echo the "fairy ring" patterns some fungi create in the ground, floated behind her in the creek.

Mun intended her design to evoke the fantasy spaces associated with fairy rings in folklore, and so incite people to reimagine the creek. But the fairy-ring design drew some critics who said a simpler configuration would better enable fungi to do their work. Even so, this effort reflects the growing interest in trying to employ fungi, members of nature's own cleanup crew, to get rid of pollution.

How nature can clean up after us

Filter feeders like oysters can remove contaminants from water; plants like poplar trees can sequester them in their tissues. Microbes can neutralize harmful molecules by breaking them into pieces, a process the EPA calls bioremediation.

Some fungi, including the oyster mushroom fungus, have been shown to do something similar, attacking contaminants with the same chemical equipment they use to decompose organic matter.

Fungi have a wide repertoire of enzymes that can be effective against contaminants, and they are particularly good at attacking large molecules, said Matthew Grossman, president of BioSage, an environmental and biotechnology consulting company that does remediation with bacteria and fungi.

But the industry favors bacteria, which can be easier to grow and to work with, Grossman said.

Successfully applying fungal remediation can be tricky, because a project's design must ensure the fungi can do their work, a condition that is often not met, said Eugene Bernat, vice president and owner of Fisherville Redevelopment Corporation, which is begining a cleanup using fungi among other organisms at a Massachusetts Superfund site.

"This is an emerging science that was invented millions of years ago," Bernaut said.

The secret of mycoremediation

A number of fungi, including the oyster mushroom, produce enzymes capable of breaking down the tough fiber in wood. Because petroleum products such as oil and diesel contain hydrogen-carbon bonds similar to those found in wood, they, too, are vulnerable to enzymes produced by the fungi's thin filaments, called mycelium, mycologist Paul Stamets writes in his book "Mycelium Running: How Mushrooms Can Help Save the World" (Ten Speed Press, 2005). Stamets was not involved with the Newtown Creek project, but his work on mycoremediation, using fungi to clean up contaminants, inspired it.

Fungi offer other cleaning services, too. The fruiting bodies of fungi, the mushrooms, can absorb metals —  oyster mushrooms can take up mercury and cadmium, he writes. Stamets also has used the mycelium networks to filter harmful microbes out of water. [6 (Or So) Reasons Fungi Can Help Humanity]

The contaminants the EPA has found in creek sediments include metals and remnants of the petroleum industry. Oil is still leaking in from an underground spill, and raw sewages pours in with heavy rain. So, the fungi would seem to have their work cut out for them.

But while the creek might seem to hold a lot of potential for a technique he promotes, Stamets was concerned about how the project would fare.

"I applaud everyone's interest and effort in this," Stamets said. "This is good science and it is applied environmental science, but when you take this from the lab out into nature, it's a gigantic step," he said.

Through his company Fungi Perfecti, Stamets offers two-day seminars that cover mycoremediation (all are currently sold out). One of the Newtown Creek Alliance bioremediation group members behind the project, Damion Lawyer, said he attended this seminar last summer. Lawyer stressed that the Newtown project was exploratory.

"He made it very clear in the seminar: He said you are not going to be able to go home and do this. There is going to be a lot of trial and error," Lawyer said of Stamets.

During the group's first trial — which resulted in the floating platform in the creek — the group used "spawn," or starter mycelium grown, in rye berries to colonize the hay-and-burlap float before putting it in the water. Being able to accomplish this outdoors, outside of a lab, was an important step, said Lawyer, who works as an environmental field technician. "I was very happy about it; that was our main goal."

Things didn't go so well once the fairy-ring float went into the salty water; nearly all of the white growth on it disappeared.

Lawyer said the group is still learning; if the concept continues to show promise mycoremediation on the creek will probably look quite different than this test. For example, it is conceivable the fungal floats, called mycobooms, could be used to filter water coming into the creek, helping to replace long-lost wetlands, he said.

Superfund cleanups can last years, even decades, so the cleanup and restoring of Newtown Creek is just beginning.