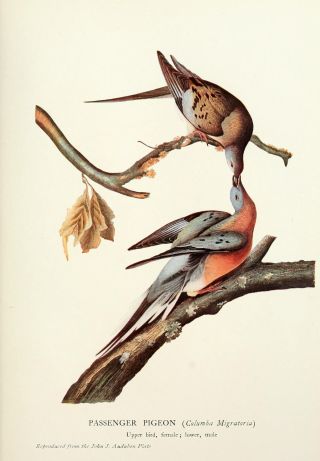 Steve Zack is coordinator of Bird Conservation for the Wildlife Conservation Society (WCS). He contributed this article to LiveScience's Expert Voices: Op-Ed & Insights.

Monday is the centenary of the extinction of the passenger pigeon. That timing is precise, because we know that the very last bird (Martha, after Martha Washington) died in the Cincinnati Zoo on September 1, 1914. It was, without doubt, the most dramatic extinction ever witnessed.

No other bird has so impressively darkened the skies and stirred wonder and awe in the immensity of its flocks as did the passenger pigeon. The bird was witnessed by John James Audubon, John Muir, Thomas Jefferson, George Washington and countless of their peers in early America.

"The number of these birds … was far beyond the power of human calculation," wrote Virginia historian Philip Bruce in the 17th century. With awe, he recorded that, "for hours they darkened the sky like a pall of thunder clouds; and that they broke down, by their weight, the limbs of the forest whenever a entire flock lighted in search of food."

The passenger pigeon was likely the most abundant bird on earth in the 18th century, numbering three to five billion individuals. By the end of the following century it was extinct. What can society say about this seminal episode in environmental history? What have we learned, and what may we yet still learn from it?

Ectopistes migratorius. The wanderer that migrates. The passenger pigeon was a bird of eastern North America that moved in search of mast. Mast is a botanical term for the hard nut fruits produced by trees like beeches and acorns. In the eastern deciduous forests of what is now the United States, the search for mast was extensive and frequently synchronized between different species regionally. The immense flocks of passenger pigeons were most abundant in these forests.

"They make waste whole forest in a short time, and leave a famine behind them for most other creatures," noted colonial historian Robert Beverly in 1722. " . . . they have never been observed to return to the northern countries in the same way they came from thence, but take quite another route, suppose for their better subsistence." [Images of Rare Passenger Pigeon Museum Specimens]

That seems the essence of the passenger pigeon's ecology (consuming abundant mast) and its behavior (the massive flights of these birds across the country until such mast was found). The abundance of the species was proportional to the abundance of its mast.

Colonial Americans felled the forests for their wood and to make room for agriculture. They also shot and netted the passenger pigeons in great — even astonishing — numbers for consumption.

As forests were felled

Although massive hunting events are the popular explanation for the passenger pigeon demise, I side with Argentine scientist Enrique Bucher's interpretation of how the felling of the forests led to disruption of the copious masting phenomenon and the cascading decline of that once hyper-abundant bird.

The scale of land-clearing was immense, and large trees (which produce the most abundant fruits) were preferentially felled. Valley bottoms, dominated by beeches — the most important hard nut trees of the pigeons — were cleared for farming. Once abundant mast began to disappear, the pigeons also lost the capacity to breed twice in a season across different masting locales.

The market hunting of mere millions of birds paled in comparison to the loss of billions that once darkened the skies in search of mast.

Market hunting was eliminated by U.S. Congressional legislation in the early 1900s — too late for the passenger pigeon, but in time for other species. In the century since, nations across the globe have enacted laws that protect native species, and created numerous parks and reserves for wildlife. Arguably, such actions and public interest have meant fewer extinctions since that famous one, as society invests and acts upon endangered species.

However, people are less zealous about protecting species when abundant or even common. The unlearned, and maybe unrecognized, lesson is that when passenger pigeon abundance was in the many millions, down from a few billions, its fate was sealed. There was a threshold of forest clearing and mast disruption that meant the end decades before Martha's lonely demise. Forests remained, but not the copious mast.

Old World Vultures were once abundant, highly social, and mobile birds. But poisons intended to kill game and veterinary medicines given to livestock, subsequently consumed by the obligate scavengers, have dramatically reduced vulture populations in Asia, and now Africa, with the International Union for Conservation of Nature (IUCN) recently recognizing 12 of the 16 species as "at risk."

Flamingos, too, are highly social and famously nomadic wanderers. Four of the six flamingo species are endangered because of mining and other threats to their critically important soda lakes, where they feed and breed.

African Grey Parrots aggregate in tremendous numbers around fruiting trees and at forest openings rich in salts in Central African forests. Millions of these birds have now been lost to the pet trade, putting the species at risk.

Are vultures, flamingos, parrots, and numerous other abundant, highly social, and mobile species destined to the same fate as the passenger pigeon? Can society know the thresholds for the resources that drive such animals' movements and define their ecology?

Martha alone could not darken the skies. But on the important centenary of her death, we need to reflect and act upon what can be learned from the dramatic extinction of the species she represented. The clouds that were once dense flocks of passenger pigeons remind us of the darker future for us all if we fail to appreciate species in the context of the wider ecological role they play.

Follow all of the Expert Voices issues and debates — and become part of the discussion — on Facebook, Twitter andGoogle +. The views expressed are those of the author and do not necessarily reflect the views of the publisher. This version of the article was originally published on Live Science.