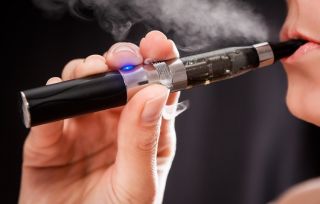 In particular, tougher laws are needed to restrict young people's access to e-ciggs, as the devices are called, and to govern the marketing and sales of the products to young people, the AHA stated.

The organization's new policy statement recommends that the federal government ban e-cigarettes for minors. The group cited studies that suggest e-cigarettes are a gateway to traditional cigarettes and can lead to nicotine addiction, rather than helping smokers kick the habit, as the devices are sometimes claimed to do.

The Food and Drug Administration regulates cigarettes and other products including tobacco and smokeless tobacco. But currently, "only e-cigarettes that are marketed for therapeutic purposes are currently regulated by the FDA Center for Drug Evaluation and Research (CDER)," according to the agency.

The new AHA recommendations also call for controlling other aspects that may make the devices appeal to young people, including advertising that often includes celebrity endorsements, and flavor additives.

The report points to a study recently published in the journal Pediatrics that showed e-cigarette advertising jumped 250 percent between 2011 and 2013, and reached about 24 million minors.

The new policy statement is based on what scientists currently know about e-cigarettes, but the AHA also recommended more research into the health effects of these devices. [Vaping: How E-Cigs Work (Infographic)]

"E-cigarettes have caused a major shift in the tobacco-control landscape," Aruni Bhatnagar, lead author of the study and chair of cardiovascular medicine at the University of Louisville, said in a statement.  "It's critical that we rigorously examine the long-term impact of this new technology on public health, cardiovascular disease and stroke, and pay careful attention to the effect of e-cigarettes on adolescents."

E-cigarettes that contain nicotine are still considered tobacco products and should be treated no differently under existing laws that ban the sale of such products to minors, the new policy statement recommended.

The levels of nicotine and other toxic substances in e-cigarettes are lower than those of cigarettes. However, akin to the situation with secondhand smoke, people near a person who is smoking an e-cigarette, or "vaping," can still inhale chemicals from the device. So the AHA suggests that laws banning smoking from public places should also apply to e-cigarettes.

The FDA has proposed a new rule that would allow the agency to regulate e-cigarette sales, but that rule has yet to be approved.

The new recommendations are published today (Aug. 25) in the journal Circulation.