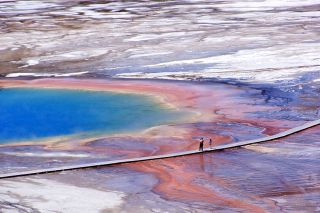 The U.S. National Park Service has an important message for visitors: Leave your drones at home!

Park officials have yet to recover the drone, and have not determined if the crash caused any damage to the site, but an investigation into the matter is ongoing, Amy Bartlett, a park spokesperson, told Live Science. [See photos of Yellowstone's Grand Prismatic hot spring]

Grand Prismatic is named for its colorful algae mat, which circles the spring in shades of red, orange, yellow and green.

"It's a hugely popular, photographic hot spring in Yellowstone," said Bartlett, who also noted that, while park officials aren't yet certain, the tourist was likely flying the drone over the hot spring to capture an image or video.

Park officials haven't yet recovered the downed drone from Grand Prismatic, partly because they have not determined where the vehicles landed in the spring, Bartlett said. Measuring more than 300 feet (91 meters) across and reaching depths of 160 feet (49 m), the hot spring is the largest in the United States, and the third largest in the world.

"We'll probably have to fly a real, piloted helicopter over it to get the exact location," Bartlett said. She also said that, because of the spring's large algae mat, the ground surrounding the site is soft, making it impossible for park officials to assess the situation on foot.

Once the officials figure out exactly where the rogue drone is located, they can determine what, if anything, they're going to do with it.

"We don't know what damage may have been caused when it entered the hot spring, but we also don't know what kind of damage could be caused either by leaving it there or by taking it out," Bartlett said.

Park officials have not identified the person responsible for the downed drone, but Bartlett said that other park visitors did witness a tourist on a nearby boardwalk controlling a drone that later fell into Grand Prismatic.

The drone pilot did report the incident to officials at the park's visitor center, but it wasn't clear to Yellowstone employees at the time that the drone was still in the hot spring, Bartlett said. As such, the pilot was not apprehended nor identified by park officials. Bartlett said an investigation into the matter is ongoing.

Earlier this summer, park officials recovered a drone that had crashed near a marina in Yellowstone Lake, Bartlett said. Other national parks have also reported recent disturbances caused by drones. In April, visitors to Grand Canyon National Park, in Arizona, complained to park officials that a noisy drone flying overhead ruined their evening sunset. Earlier in April, drone handlers in Zion National Park, in Utah, were caught harassing a herd of bighorn sheep with a robotic flyer.

These and other events prompted the National Park Service to issue a formal ban on drones in June. The order, which went into affect on June 20, cites noise, harassment of wildlife and visitor safety as a few of the reasons for prohibiting these flying robots over federally administered lands and waters.

Unfortunately, Bartlett said that drones aren't the only items that find their way into the hot springs at Yellowstone. Visitors often confuse these environmental landmarks with wishing wells or even garbage cans, throwing coins and trash into the springs, she said.